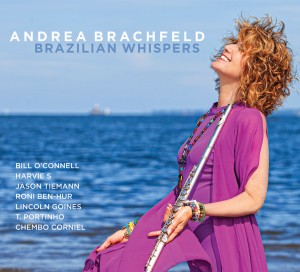 Midwest Record (Chris Spector)
A member of the sorority of women that know how to pour the flute juice with a free hand that ultimately wind up letting Brazil shine on them, Brachfeld goes right to the Jobim source while avoiding most of the Jobim clichés to really get inside the music she loves. Backed up by a crew you don't find waiting around the union hall for some pick up ...

London Jazz News (Sam Norris)
Flautist Andrea Brachfeld's CV reads like a who's who of Latin jazz. A graduate of the Manhattan School of Music, and a recipient of some of the genre's most prestigious accolades (including the 2006 Chico O'Farrill Lifetime Achievement Award), she has recorded and/or performed with such luminaries as Paquito D'Rivera, Tito Puente, Slide Hampton an ...