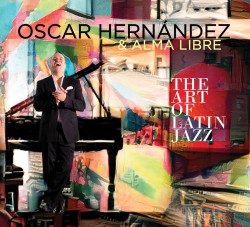 ALBUM OF THE WEEK We spend a lot of time talking about the minutiae of music making, digging into theory, history, and the way that the sounds make us feel; far too often, we leave the idea of artistry out of our conversations. The exclusion of this topic is a bit ironic, as artistry is probably the most important piece of the puzzle. The decisions that a musician makes about their product, the time they spend refining their craft, and the specifics that only they can bring to the setting are really the defining factors behind the music. Anyone can play chords, rhythms, melodies, or even improvise, but no two individuals bring the same priorities to a musical project. With each step of the creative process, musicians make judgements about the composition, performance, and presentation of their project, based on their personality and background. These choices are the interesting pieces of any performance, and they are the things that we should be watching intently. Pianist Oscar Hernández and his group Alma Libre explore that idea fully on The Art of Latin Jazz, putting a unique identity on display in a captivating set of music.

Embracing Tradition With A Personal Stamp
With many years of experience in Latin music, Hernández embraces the traditional rhythmic and harmonic essence of the music on several songs. Rhythm section and wind players play in tight unity across the main theme on "The Art Of Latin Jazz," balancing melodic lines and band breaks in a seamless fashion. A busy montuno break and wind line sends the band soaring into a solo from trumpet player Gilbert Castellanos, who charges into a fierce stream of notes with a bebop intensity. Hernández brings an equal fire into his statement with cleverly syncopated melodies that melt into the groove, before falling into an ostinato behind a powerful display of percussive ideas from conguero Christian Moraga. A fierce rumba guaguanco explodes into a stuttering rhythmic groove that opens into a fluid melody from Almario on "Timeshift." Bassist Jorge Perez weaves an engaging statement that combines elements of lyrical invention and technical wizardry until Hernández jumps into the frey with running notes, moments of syncopation, and lots of finesse. Almario jumps enthusiastically into his improvisation, attacking the groove in carefully chosen spots while running through fiery lines that inspire response from the rhythm section. A montuno with a taste of timba sends the band charging into an intensive melody that bursts into a jaw dropping solo from Moraga. Almario riffs over a full band ostinato on "Entre Amigos," before falling into a memorable melody that fits into syncopations around the chord changes. The musicians decisively hit a number of breaks around a jaw dropping montuno from Hernandéz, making way for Almario to tear the groove apart with a ferocious series of ideas. Hernandéz brings out the percussive element of his instrument with an equally assertive statement that builds into a sharp band accents that form the foundation for Branly's smart solo. Hernandéz sets an ominous tone with a darkly foreshadowing unaccompanied piano introduction on "Fort Apache," making way for an explosive minor melody from the wind players. A band break drops the dynamic from a roar to a whisper behind Hernandéz, who writes an provocative story with precise rhythms and running melodies, followed by Almario, who grabs an idea from the pianist and builds it into a fierce storm. Hernández understands the greater Latin Jazz tradition, following this lineage with a personal stamp that brings exciting performances from his musicians.

Different Compositional Moods And Textures
Hernández explores several compositions that reveal a reflective side to his writing. A gorgeously reflective solo piano introduction leads into a gentle groove on "Danzón Para las Seis," where Hernández and Almario execute a lush melody. An abrupt rhythmic break sends the band into the mambo section, where a coro frames a solo from Almario, which sits between tipico phrases and jazz ideals. The band falls off a ponche figure into an attention grabbing solo from Hernández, full of authentic mambo phrasing, jazz influenced note choices, and just a bit of funk. Hernandéz employs a colorful collection of harmonies before emphasizing a pedal tone that signals the band's entrance into a gorgeous bolero melody on "Como Te Amo." The pianist constructs a beautiful statement with equal parts restraint and motion, carefully developing his idea into a thought that captures the reflective mood. Almario tempers his statement with space and careful note choices, building a smoldering fire over the changes with jazz subtlety. A dramatic pedal tone extends behind a busy montuno on "Alma Libre" before Almario quietly builds momentum into a tense melodic phrase. Hernández plays off the stagnant harmony with a steady intensity, hammering the sonic backdrop with syncopations and running lines, eventually exploding into a fierce ideas. Almario recalls the original thematic material before racing into his own statement that takes sharp twists and turns through the ferocious rhythmic foundation, charging towards a screaming finish. The pianist applies a number of compositional moods and textures throughout this material, providing his musicians with some thought provoking contexts for improvisation.

Adding a taste of Blues and Funk
Hernández has a great eye for musical connections, and he shows that on several songs with a taste of blues and funk. A funky bass line from Perez sets the tone for a fun and energetic mood on "Right On," as the wind players weave a playful melody around a driving cha cha cha. Almario charges through frantic runs and edgy rhythmic ideas with a touch of soul, followed by an aggressive bop fueled statement from Castellanos. As the band quiets, Hernandáz leans on bluesy embellishments and sparse phrasing to shape his ideas before falling into a vamp for a a tastefully constructed solo from Branly. A moody vamp explodes into an enthusiastic romp through a twelve form on "ESPN Blues" anchored by a melody that hits the right balance of rhythmic intensity and jazz blues. Castellanos takes some time phrasing around blues notes before racing into a flurry of notes, leading into Almario tearing through the changes at full throttle. Hernandéz seamlessly mixes subtle syncopations with jazz fueled ideas to develop a classy statement before the band frames a high energy exchange between Branly and Moraga with a powerful unison riff. A sparsely syncopated bass line adds a bit of funk behind Justo Almario's sax riffs on "One Day Soon," leading into a joyful melody over an energetic son montuno. Almario attacks the ostinato with a mix of bluesy soul and a clave edge, making way for a beautiful statement from Hernández, who showcases his gift for thematic development. A band break leads into an exuberant solo from Castellanos, who hits rhythmic accents around every color of the chords before drummer Jimmy Branly plays with rhythmic tension against the song's main groove. Each song here recognizes interactions between Latin dance music, jazz, and popular music, mixing them into a unique project that has Hernández's handprints all over it.

Music With Refined Elegance And Enthusiasm
Hernández brings a defined sense of artistry to the music on The Art of Latin Jazz, both through his compositions and his performance. It's obvious that Hernández has spent years considering the musical approaches he considers important, based on his experiences as a sideman with Ray Barretto, Rubén Blades, and more, as well as his time as the leader of The Spanish Harlem Orchestra. His compositions are written deep inside the style, making each musician an essential part of the music. This puts the rhythm section and the wind players on equal footing, as they work together to cleverly build composed and improvised structures within the music. Groove is important, but it never outweighs harmony; musicians can play melodically, but their phrases bounce around the melody. Hernández obviously values improvisation deeply, as he creates a number of statements overflowing with personality and gives his musicians ample opportunities to shine. Hernández brings a refined elegance and enthusiasm to the music on The Art of Latin Jazz, liberally applying his artistic sensibilities to a must-hear collection of Latin Jazz.

Other Reviews of
"The Art of Latin Jazz":