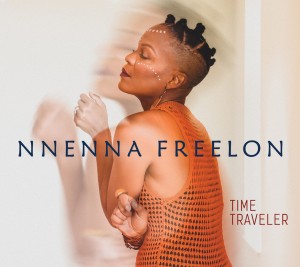 Vocalist Nnenna Freelon has always had a powerful instrument, but rarely, if ever, has she employed that voice in such an intimate way.
DownBeat

Multi-Grammy nominated vocal artist Nnenna Freelon is back, delivering her eleventh album after a decade-long hiatus from the studio. With Time Traveler, she offers a celebration of love and a prayer of hope for those living with loss. The sessions for the album stretched over two years, between 2018 and 2020, coinciding with the loss of Freelon's soulmate and husband of forty years, Phil Freelon, to ALS. Freelon draws from her & Phil's shared love of jazz and rhythm and blues, to step through an imagined doorway where past, present and future collide. From the album's centerpiece, a medley of Marvin Gaye classics, to standards such as "Come Rain or Come Shine" and "Moon River," or her self-penned title song, Freelon reminds us of the grace and elegance that naturally accompanies her approach to interpreting melody. Inspired by her emotive glances to the past, and soulful presence in the here and now, she paints a portrait of reverence and gratitude for the gift of love that permeates every aspect of the human condition.

Midwest Record (Chris Spector)
After a decade away, the hands down award winner is back with a set that refashions old tunes through the lens of the grief and loss she's gone through while she's been away from us. You want a sample? Dionne Warwick never took Bacharach/David to church like this! Especially on a signature song. A strong statement throughout about loss that doesn't ...

Black Grooves (Brenda Nelson-Strauss)
Like many over the past couple of years, jazz vocalist Nnenna Freelon has been confronting grief. The singer's beloved husband and partner of 40 years, Philip Freelon, passed after a long battle with ALS, shortly before the pandemic caused millions of untimely deaths and left bereaved families across the globe in mourning. Freelon's new album, Time ...

Marlbank (Ireland) (Stephen Graham)
Remember where you are when you hear Time Traveler. It will be easy to. If you are in your car you'll be pulling over to the side and need to switch the engine off. If you are in a place where the radio is on you'll be waiting for the DJ to say who the record is by. You'll hear about it word of mouth probably first of all. It has that kind of aura ...

NPR Weekend Edition (Mandalit Del Barco)
Nnenna and Phil Freelon were a power couple: He was the lead architect for the Smithsonian Institution's National Museum of African American History & Culture, and she was a Grammy-nominated jazz singer, composer, actress and playwright. They enjoyed an exciting, full life of work, travel, friends and family. Phil Freelon died in 2019. Now, Nnee ...

DownBeat (Editor's Pick) (Frank Alkyer)
Vocalist Nnenna Freelon has always had a powerful instrument, but rarely, if ever, has she employed that voice in such an intimate way. Freelon recorded Time Traveler following the loss of her husband, Phil, an accomplished architect who led the design of the Smithsonian National Museum of African American History & Culture. On Time Traveler, the G ...

WBGO (Nate Chinen)
On Time Traveler, her first album in more than a decade, Nnenna Freelon considers the passage of time through the prism of personal loss. The album is a tribute to the memory of her husband of 40 years, noted architect Phil Freelon, who died in 2019. Among the more emotional expressions on the album is this cover of "Time in a Bottle," a posthum ...

WDCB (Chicago) (Paul Abella)
It has been entirely too long between albums from Nnenna Freelon. Discounting a Christmas album from 2012, the last we heard from Freelon was in 2010. She's back in 2021 with Time Traveler, an album recorded in the wake of her husband's long term illness and death in 2019. Considering the tragedy and heartache surrounding the album, it's an astonis ...

Jazzwise (UK) (Peter Quinn)
4-STARS Aside from a Christmas album that she released in 2013, Time Traveler is vocalist Nnenna Freelon's first studio recording in more than a decade and her first with Origin Records. In a similar way to her 2010 album, Homefree, the new collection brings together songs that have a particular resonance for the singer. But there's an extra poign ...

WRTI (Philadelphia) (Matt Silver)
Jazz Album of the Week: Vocalist Nnenna Freelon Remembers Late Husband Through Music They Shared In 2019, Grammy-nominated vocalist Nnenna Freelon lost her husband Phil, the man she called her soul mate, after a years-long battle with ALS. They'd been married for 40 years. Phil was a renowned architect and had been one of the lead executives at ...

Gina Loves Jazz (Germany) (Matthias Kirsch)
It's her eleventh album to date and her first since "Homefree" came out back in 2010. Nnenna Freelon sounds as fresh and graceful, jazzy and soulful as ever and in most cases on her beautiful new disc, even better than ever before. Harking back to her "Listen" (1994), "Shaking Free" (1996) or "Soulcall" (2000) days when she released collections of ...

Papatamus / Cadence (Robert Rusch)
It has been almost ten years since NNENNA FREELON issued a recording under her own name. If you followed her on Columbia or Concord Records, you will certainly welcome TIME TRAVELER [Origin Records 82822]. Recorded between 2018 and 2020, Freelon gets strong support from a pool of 13 musicians, most notable Keith Ganz [gtr] and some tasty touches wi ...

The New York City Jazz Record (Alex Henderson)
Nnenna Freelon was in the middle of recording Time Traveler, her first new album in over a decade, when her husband of 40 years died from Lou Gehrig's disease in 2019 and it ended up becoming a tribute both to her partner and the R&B and pop of the ‘60s and ‘70s. The album gets off to an R&B-drenched start with the Burt Bacharach-Hal David f ...