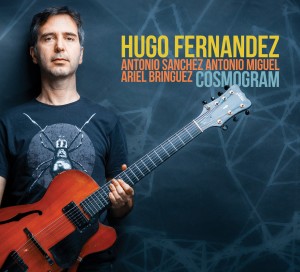 Originally from Mexico, guitarist Hugo Fernandez graduated from Berklee and the University of New Orleans before moving to Spain several years ago. For his debut recording on Origin, he assembled a multicultural group of imaginative artists, including Cuban saxophonist Ariel Bringuez, Spanish bassist Antonio Miguel, and drumming great Antonio Sanchez, to explore a broad range of lyrical new originals. "Each tune comes as an evocative 'abracadabra' that the guitarist proceeds to cast." - Eclectic Magazine.

Midwest Record (Chris Spector)
A world wise/world traveled guitarist with multi-culti sensibilities travels the Abercrombie/Metheny route to world soundings. An expert and being laid back without falling over, Hernandez brings his crew with south of the border sensibilities right to the fore of contemporary, progressive guitar work that relies on features other than pyrotechnic ...

All About Jazz (Jack Bowers)
Of all the instruments in a group or orchestra, none has a broader or more variable sonic profile than the guitar. When it is played properly, with earnestness and sincerity, a guitar can move the listener to tears; when it is used, however, is to elicit sounds that are best described as disquieting and cacophonous, that is another matter entirely. ...

All About Jazz (Edward Blanco)
Mexican-born Hugo Fernandez is a modern jazz guitarist who follows up his well-received debut album Origenes (CDbaby, 2012) with the new modern-styled Cosmogram featuring eight sophisticated original compositions in a generally warm-natured set of light and engaging modern jazz. A graduate of the prestigious Berklee School of Music in Boston, Ferna ...

Jazz Weekly (George W. Harris)
Guitarist Hugo Fernandez defers to tenor and soprano saxist Ariel Bringuez quite a bit here on a quartet session along with the energetic rhythm team of Antonio Miguel/b and Antonio Sanchez/dr. There's a bit of a tribal war dance drum beat on as the team sounds a bit indie-rockish on "Reconciliation" and there's a rockish beat on "Sublime" that fea ...

Music Life & Times (Travis Rogers, Jr.)
Right from the start, throw out any ideas of comparing Hugo Fernandez to anybody. Comparisons to Pat Metheny and John Abercrombie have been made but that presupposition is going to make you miss the absolute thrill of Fernandez' album "Cosmogram." This is original. This is fresh. This caught me by surprise. Through my first listening of "Cosmogr ...

The New York City Jazz Record (Tom Greenland)
Guitarist Hugo Fernandez, originally from Mexico, now based in Madrid, has released Cosmogram, his second date as a leader, with the help of countryman drummer Antonio Sanchez, Cuban saxophonist Ariel Bringuez and Spanish bassist Antonio Miguel. A relaxed set with hummable originals, all composed by Fernandez, the music is highly accessible with ge ...

Improvijazzation Nation (Rotcod Zzaj)
You need look no further if it's passion-filled guitar jazz your ears are thirsting for! Hugo and his pals (antonio Sanchez on drums, Antonio Miguel on acoustic bass and Ariel Bringuez on tenor & soprano sax) play with all the gusto you'd expect for their all-original release. Though this is my first listen (as well as yours, since it's a debut), ...

La Habitación del Jazz (Madrid) (Editor)
Hugo Fernandez presents his second album as a leader. If the first we liked (See CD review "ORIGINS") This brings us to like a lot. All topics are his compositions and production as well. As he did in his previous album, Ariel Bringuez accompanies him that Antonio Sanchez and Antonio Miguel add. Hugo Fernandez continues to demonstrate its grea ...