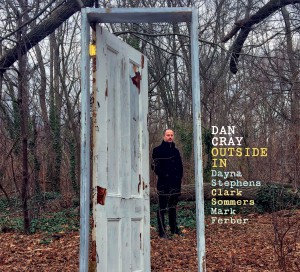 Every second is executed with taste and balance - a kind of jazz feng shui.
- Downbeat Magazine

For his second release on Origin, New York pianist Dan Cray draws on the inspiration he received from a year spent living and working out in the Sierras and hiking in Big Sur. With rising star Dayna Stephens on saxophone, along with drummer Mark Ferber and Cray's longtime bandmate, bassist Clark Sommers, Cray's mix of his own compositions and arrangements of several rarely heard standards offer a meditation on nature and the search for peace wherever you are. "This music engages both mind and spirit, not changing the world so much as brightening the day." -Downbeat.

Reviews of Outside In

Midwest Review (Chris Spector)
Piano jazz inspired by a year of hanging out in Big Sur and it's environs, it's no wonder all those 50s jazzbos liked hanging around San Francisco. Playing with a wide openness that's new to his artillery, Cray's added colors and textures bring his New York vibe somewhere else indeed. Tasty, laid back sitting down jazz, Cray is on a roll. Well d ...

Fresh Air - NPR (Kevin Whitehead)
TERRY GROSS, HOST: This is FRESH AIR. Jazz pianist Dan Cray comes from the Chicago suburbs and lives in New York. But much of the music on his new album stems from a year he spent teaching at the University of Nevada in Reno. Our jazz critic, Kevin Whitehead, explains. (SOUNDBITE OF DAN CRAY SONG, "OUTSIDE IN") KEVIN WHITEHEAD, BYLINE: Dan ...

All About Jazz (Dan Bilawsky)
4-STARS Encounters with the wonders of nature have a way of snapping everything into perspective and tamping down humanly worries and concerns. Too often we spend time absorbed and obsessed with working from the inside out, projecting ourselves into the world. But sometimes it's better to simply go the other way and let the beauty that exists on ...

Jazz Weekly (George W. Harris)
Pianist Dan Gray delivers the most bona fide jazz album of the quartet. He brings together Dayna Stephens/ts, Clark Sommers/b and Mark Ferber/dr for a split of seven songs between covers and originals. Stephens' warm and breathy tenor is a highlight here, relaxed and yearning with Cray's pulse on "Small Sir" and filling the room with smoke rings wi ...

Chicago Jazz Magazine (Quentin Coaxum)
Outside In marks Dan Cray's second release on Origin Records. Once based in Chicago, Cray now resides in Brooklyn and has returned to the studio to record music inspired by his travels throughout Big Sure and the Sierra Mountains. Recorded in New York, Cray has set out to create music inspired by nature's natural ambiance and inner peace. The ...

Jazz Trail (Filipe Freitas)
Outside In is the title of the sixth album by the pianist/composer Dan Cray, his second recorded in quartet. Regarding the lineup, and in comparison to Cray's previous work, Meridies, the saxophonist Noah Preminger was replaced by Dayna Stephens, while the drummer Mark Ferber and his longtime bassist Clark Sommers keep laying down the foundation. ...