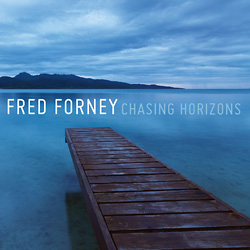 Chasing Horizons is a tight and swinging set of original tunes from Phoenix-based trumpeter and composer Fred Forney and his group of veteran improvisors. The three distinctively unique soloists, Forney, pianist Chuck Marohnic, and saxophonist Brice Winston, explore compositions that are modern, haunting, introspective, yet all interestingly catchy. ?Forney sorts through his lush lexicon of trumpet tones and statements like a writer immersed in creation, selecting only the most suitably beautiful phrases and inflections.? - American Jazz Symposium.

All Music Guide (Ken Dryden)
OA2, like its parent label Origin, has sought to give wider exposure to musicians who are deserving. Trumpeter Fred Forney has had a long career playing in symphony orchestras, in Broadway shows, with pop acts, and as a sideman, in addition to serving as director of jazz studies at Mesa Community College in Tempe, AZ, where he took part in the exce ...

All About Jazz (John Barron)
Phoenix, Arizona-based trumpeter/composer Fred Forney has performed with a host of jazz heavies, including Bob Mintzer, Don Menza, and Roger Kellaway, and has toured internationally with the Bobby Caldwell Big Band. Chasing Horizons is Forney's second release as a leader and debut for OA2 records. The disc is a high energy progressive jazz session ...

Jazz Times Education (JazzTimes)
Originally a classical trumpeter who also taught high school music classes, Fred Forney switched his career entirely when he discovered jazz. He traded his symphony work for leading a combo while continuing to teach. Based in Phoenix, Ariz., he is the director of jazz studies at Mesa Community College. He also works as both a lead trumpeter and ...

The Davis Enterprise (Ric Bang)
Fred Forney, a "first call" trumpeter for touring artists who perform in Phoenix, also has recorded a number of albums with musicians who live and work in that area. He's supported here by tenor saxman Brice Winston, pianist Chuck Marohnic, bassist Dwight Kilian and drummer Dom Moio. Each composition relates to an event, individual or locale th ...

International Trumpet Guild, January 2011 (Jeremy Brekke)
Fred Forney's second release as a leader, Chasing Horizons features a set of original compositions that keep with the traditions of jazz while making it all sound new and interesting. A long-time Arizona resident, Forney is the Director of Jazz Studies at Mesa Community College and has been involved with numerous recording projects in Phoenix metro ...