Jack Mouse - Range of Motion
by Jack Bowers, All About Jazz

Jack Mouse, a sure-handed, high-energy drummer who is best known as a dependable timekeeper for groups large and small on the Chicago scene and elsewhere, moves to the head of the class on Range of Motion, leading a quintet whose members share his expansive, something-for-everyone point of view. Apart from his role as rhythmic helmsman, Mouse also writes, and writes quite well, having composed all of the album's ten selections, themes whose... read more

Through a long life, there have been perhaps half a dozen instances of a piece of music figuratively grabbing me by the throat and DEMANDING my attention, and I'm mesmerized from the very first time I hear it. For whatever reasons (and I wish I had the musical knowledge to identify them), two numbers on this album, "Ups And Downs Interlude" along with "Ups And Downs", are the latest examples of such songs. Even after listening to them for a... read more

Chicago guitarist John Moulder has proven himself as versatile as he is virtuosic. He's served as producer on a handful of his own albums, and each has a strikingly different theme, purpose and array of musicians. Despite that, Moulder almost always inclines toward big picture concepts — something you could reasonably expect, given that he's spent much of his career holding a "day gig" as a Catholic minister.

speak - Speak
by John Barron, All About Jazz

The Seattle-based quintet Speak explores a multitude of musical moods with their eponymous recording debut. An exemplary model of genre-defying music, the disc features original compositions that delve into odd-metered progressive rock grooves and spontaneous bursts of improvised sound that are at times explosive.

The opening cut "Amalgam in the Middle" makes anthemic pronouncements with an extended section for Aaron Otheim's intensity... read more

A medical condition that led to a seizure and two brain aneurysms in 1999 forced jazzman Anthony Branker to give up the trumpet, but not his talents as a conceptualist and composer. (He is also an educator ? the founder and director of the jazz studies program at Princeton.) His newest release, featuring his all-star sextet Word Play, is both beautiful and provocative. Favorites: ?Three Gifts (from a Nigerian Mother to God)? and the title track... read more

The quality of playing on Intersection not only by its leader as bassist, Ark Ovrutski, but all of the musicians is altogether exceptional. Ark Ovrutski takes nothing for granted in music. Nor should we in listening to him. If you know how your ancestral family of bassists 'goes', or how any other musician 'goes' then this almost certainly isn't for you. Not that Ovrutski does anything wildly idiosyncratic, let alone provocatively... read more 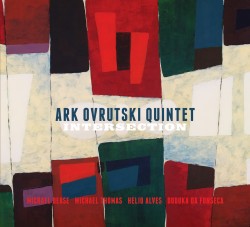 In my well-worn copy of the third edition of the 'All Music Guide to Jazz,' Stevie Wonder is mentioned 42 times--more than Hoagy Carmichael, Harold Arlen or Cole Porter. It was inevitable that jazz musicians would discover Wonder. For the generation that came of age in the mid-60's through the '70s, including members of the Deep Blue Organ Trio, Wonder was in the air. And so it is that organist Chris Foreman, guitarist Bobby Broom and drummer... read more

Scenes - Variable Clouds: Live at the Earshot Jazz Festival
by Dan McClenaghan, All About Jazz