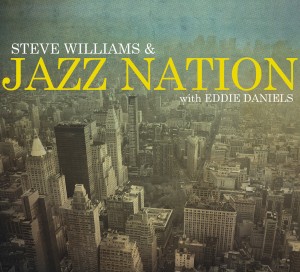 Killer stuff throughout that's so hot even the esteemable Eddie Daniels can't be more than frosting on this cake.
Chris Spector

Assimilating the sounds of jazz's greatest composers to masterfully create a voice all his own, the veteran composer, alto saxophonist and band leader takes his Washington, DC-based big band through a tradition-drenched yet thoroughly modern set of original compositions. Along with special guest, the mighty Eddie Daniels, Williams and the band not only prove that Big Bands are "alive and well," but also exciting, creative and inspired. Former Music Director of the U.S. Navy Commodores, Williams has also been a member of the Afro Bop Alliance, The Smithsonian Jazz Masterworks Orchestra, and the famed One O'Clock Band from North Texas State.

Midwest Record (Chris Spector)
We don't even want to argue here. Williams has paid dues of a different sort having come from the Texas Lab Band and the Smithsonian Jazz Masterworks Orchestra. He's done something quite admirable here---he's distilled the works of the masters into an original set of his own songs that define modern daddio jazz with such style and authenticity t ...

Jazziz (Ed Kopp)
It's almost impossible to sustain a touring big band in today's economy, so it's left to regional ensembles to keep the big band tradition alive. Most of these local groups don't play together frequently enough to develop a distinctive personality. But Steve Williams & Jazz Nation sound like a tight fraternity on this intelligent and accessible ...

JazzScan (Ric Bang)
Composer, arranger and saxophonist Steve Williams is another of the many individuals who is famous within the music world, but relatively unknown outside it. He's a graduate of the University of North Texas -- formally North Texas State University, an institution that has produced a number of great jazz musicians -- and Florida State University; du ...

The New York City Jazz Record (George Kanzler)
Clarinetist/tenor saxophonist Eddie Daniels is represented at both ends of the ensemble spectrum on these CDs: in duo with pianist Roger Kellaway on Duke at the Roadhouse and as a guest with the big band Jazz Nation led by Steve Williams, a role recalling Daniels' tenure in the Thad Jones-Mel Lewis Jazz Orchestra. Duke at the Roadhouse is an adv ...