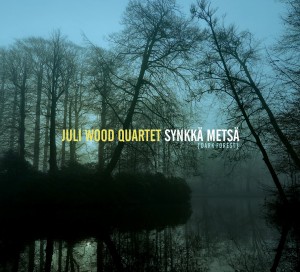 Inspired by Art Farmer's 1964 recording of Swedish folk songs, "To Sweden With Love," Chicago saxophonist Juli Wood delved into her own Finnish heritage for material to explore on her newest recording. With hauntingly beautiful melodies and harmonies that invite new interpretations, Wood and her quartet - with Alejandro Urzagaste on guitar, Clark Sommers on bass and drummer Mike Schlick - create an inspired recording of six traditional Karelian, Finnish and Aland Island songs along with two compositions by famed Finnish musician Matti Jurva. "She weaves her own straight forward statements from the horn with a great deal of heart and a real heaping helping of soul." - Jan-Erik Holmberg, Hufvudstadsbladet/Helsinki.

All About Jazz (Dan McClenaghan)
When the subject of Finnish jazz is mentioned, the names Iro Haarla (piano), Vernie Pohjola (trumpet), Juhani Aaltonenen (saxophone) and Heikki Sarmanto could get tossed about as four from Finland who are producing superb recordings on TUM Records. The "Finnish sound" tends toward a reflective and often melancholy minor key mode, with smoldering ...

Midwest Record (Chris Spector)
With an overview that would make you think this set has an ECM vibe to it, this collection of jazz meeting Finnish folk songs is way more daddio than you might imagine. Inspired by Art Farmer's original expatriot forays, Wood and her pals travel into the dark forest ( that's what the title translates to) (unless you'd rather have her travel into t ...

Chicago Reader (Peter Margasak)
I'm sure I'm not alone when I say that my favorite recording by trumpeter Art Farmer was his stunning 1964 album To Sweden With Love (Atlantic), a lyrical quartet session inspired by a tour his group took through the country mentioned in the album's title. I've read differing accounts about where the concept came from - either a producer sugges ...

Bird is the Worm (Dave Sumner)
Wow, what a cool recording. Based on Finnish folk songs, but delivered with a post-hard bop style that sounds equally solemn and tuneful. Tenor saxophonist Wood's quartet flirts with a spiritual jazz sound, but the deep swing of the rhythm section and the earthy blues of Alejandro Urzagaste's guitar gives it more of a Tristano-style cool jazz sou ...

WTJU - Richmond (Dave Rogers)
Tenor saxophonist Juli Wood leads her quartet in transforming eight Finnish folk songs into jazz pieces. The songs are somewhat mellow but swing well and draw the listener into the wonderful melodies which recall the most wonderful aspects of the cool jazz era. Wood is supported by Alejandro Urzagaste (guitar), Clark Sommers (bass), and Mike Schlic ...

Improvijazzation (Rotcod Zzaj)
Though this is my first listen to Juli's splendid sax work, it's easy to tell by the first 8 notes that she's a master at making those reeds sing… , and with her excellent cohorts (Alejandro Urzagaste – guitar; Clark Sommers – bass and Mike Schlick – drums), she's put together an album that will be on your playlists for a long time to come! ...

Jazz Scan (Ric Bang)
Folks understandably may not be familiar with Juli Wood and her group, aside from those who live in the Chicago area; she's a regular performer there, but apparently doesn't wander far from home. Well, this release is a gem, and Wood definitely deserves our attention. She plays tenor sax; her cohorts are guitarist Alejandro Urzagaste, bassist Clark ...