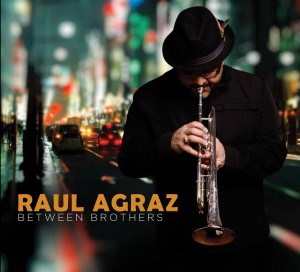 The star trumpeter transcends even the magical repertoire with his pure and radiant tone...But the electrifying and athletically awesome orchestral performances also set this album apart from many others...
Latin Jazz Network

Percolating with a combination of latin rhythms, bossa nova, swinging big band arrangements, traditional Venezuelan rhythms, and tender arrangements scored for strings, "Between Brothers" marks the dynamic solo debut of Venezuelan trumpeter Raul Agraz. Along with the electric talents of Dave Samuels, Paquito D'Rivera, Luis Perdomo, and Luisito Quintero, Agraz has created a dazzling set of music, dedicated to the musical brothers who came together to make the recording a reality. Beginning his professional career with the Venezuela Symphony Orchestra, the top call New York trumpeter has performed with Celia Cruz, Tito Puente, Oscar D'Leon, Mingus Big Band and The Vanguard Orchestra.

Reviews of Between Brothers

Midwest Review (Chris Spector)
This swinging trumpet player might have started out with the Venezuela Symphony Orchestra but a move to New York that let him kick it out with the best of Latin jazz has given him the impetus to lead his own big band. He starts this set off with such a powerful kick in the head you never recover, you just say ‘huh?'. Wild, wicked and wonderful, ...

All About Jazz (Jack Bowers)
Venezuelan-born and classically trained trumpeter Raul Agraz makes an impressive North American debut with Between Brothers, a vibrant album of Latin-oriented jazz whose harmonic and rhythmic quotients are about as strong and steady as one could wish. As is the case in other contexts these days, the term "brothers" is presumably used in a metapho ...

Jazz Weekly (George W. Harris)
Here's an exciting collection of Latin moods by trumpeter Raul Agraz, who brings together a small-big band as well as strings on this release. Agraz himself has a warm and bel canto sound to his horn, and he lets it ride like a long boarder over the percussive pieces such as the charging "Obsesion" and post bopping "FDB." The horn sections are punc ...

The Jazz Owl (Travis Rogers, Jr.)
Venezuelan trumpeter Raul Agraz has released his debut album as a leader. "Between Brothers" (OA2 Records OA2 22127) is a fantastic and dynamic treat that features some of the best of the best - the real brothers of the music. Special guests include the legendary Paquito D'Rivera, Dave Samuels, Luis Perdomo, Luis Quintero and Dan Willis. The ban ...

Downbeat Magazine (Brian Zimmerman)
FOUR STARS **** Passion, confidence and an unshakable commitment to groove are the ingredients for great Latin jazz, and Venezuelan trumpeter Raul Agraz exhibits them in abundance on his solo debut. For this ambitious project, Agraz convened a summit of New York's best session players, with special seats reserved for a few titans of Latin jazz: ...

Latin Jazz Network (Raul da Gama)
Raul Agraz's Between Brothers is welcome companion to his other releases. But more than that, it is an essential part of the growing trumpet repertoire on the sheer strength of these performances. In fact, I would go even further and say that there are few musicians who appear more steeped in their worlds than Raul Agraz. On evidence committed to d ...

El Chino (Cali, Colombia) (Editor)
Definitely this year seems to be full of pleasant surprises, in this case we refer to the debuts of renowned players, first it was Andy Gonzalez and now the turn is for the Venezuelan trumpeter Raul Agraz . Between Brothers (Entre Hermanos), a recording that appears for the AO2 Records label, is his first solo album. Agraz, who moves like a fish ...