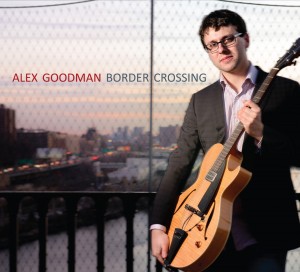 Goodman has acquired a signature style that's definitely like no other... A jazz phenomenon the world over.
- Birmingham Times

Winner of the 2014 Montreux Jazz Festival Guitar Competition for his playing and the 2013 Herb Albert Jazz Composer Award for his writing, Alex Goodman brings them both together in this set of original compositions reflecting on the transitional period during his move from Toronto to New York in 2012. Connecting favorite musicians from Canada and New York, the music draws heavily on his rich musical upbringing as a member of Toronto's eclectic jazz community and the interaction with his experiences over several years in New York. A wide-ranging project with modern classical, jazz and world music elements, along with instrumentation including cello, vibes and voice, "Border Crossing," in the end, is a truly personal statement with a soul that can resonate with all.

Midwest Review (Chris Spector)
A non-stop Canadian award-winning guitarist...With a technique and a vision that will make you think he's got some Ralph Towner blood flowing through him somewhere, he may not be mainstream now but if he ever decides to go George Benson on us - this cat is a sure thing break out star of tomorrow. It sounds like there's nothing he can't do with tho ...

All About Jazz (Dan Bilawsky)
Border Crossing was born of guitarist Alex Goodman's careful cogitation concerning his move from Canada to New York. It's a beautifully contemplative bridge-builder of an album, bringing together musicians from both realms and connecting classically-oriented ideals, jazz language, and modern thought into a seamless whole. In soaking in the se ...

Gapplegate Guitar (Grego Applegate Edwards)
What does one say after one has said everything? I don't know, since I have NOT said everything and no doubt never quite will. On the other hand one (or me anyway) has the challenge to remain fresh, to cover music 15 times a week and say something worthwhile about it all. When the music is good, as generally it is or I would not cover it on these ...

Step Tempest (Richard B. Kamins)
Guitarist and composer Alex Goodman, Canadian born and raised, moved to the United States in 2012 after the release of his Quintet album "Bridges". Since his arrival, Goodman has worked and/or recorded with bassist John Pattitucci, saxophonist Charles Lloyd, and drummer Ari Hoenig (among others). In 2014, he won the Montreux Jazz Festival Inter ...

Improvijazzantion Nation (Rotcod Zzaj)
Alex Goodman – BORDER CROSSING: Though the liner notes make this sound like it's a "chamber jazz" set, it goes far beyond that label… when the vocal from Felicity Williams kicks in against Alex's guitar on the opener, "Acrobat", you ears will realize that you're in for a sonic treat not soon to be put down – in fact, I listened through all s ...

Jazz Weekly (George W. Harris)
Alex Goodman uses both acoustic and electric strings with a velvety teamof Michael Davidson/vib, Andrew Downing/b-cel, Rogerio Boccato/perc and the wordless voice of Felicity Williams, with drums by Fabio Ragnelli appearing on a few of the tracts. The pieces are intricate, yet melodic and flowing as Williams' voice glows over the luscious "Acrobate ...

Jazz Da Gama (Raul Da Gama)
The forty-five or so minutes of music led by the young guitarist, Alex Goodman bristle with hip energy and feature extraordinary instrumental and vocal combinations such an angular cello wailing in not-so-unison with Goodman's sleek guitar lines or heavenly vocalastics and a twinkling vibraphone backed by a whole topographical ocean of arresting pe ...

Song Writing Magazine ()
For this week's Monday exclusive we have a treat for the jazz lovers, as Toronto-based guitarist Alex Goodman kindly shares the first track from his forthcoming album Border Crossing with Songwriting readers. Goodman graduated from the University of Toronto with a BA in Jazz Performance, after which he completed a Master's programme at the Manha ...

The Whole Note (Ted Quinlan)
Composition and improvisation flow freely into each other on guitarist Alex Goodman's Border Crossing. For his latest recording Goodman has assembled what can best be described as a jazz chamber group. His writing is ambitious and complex, making full use of the wide range of colours available from this outstanding ensemble. Andrew Downing, who dou ...

Saskatoon Star Phoenix (Bill Robertson)
Border Crossing: how appropriate a title is that for a genre-bending, genre-crossing gathering of jazz-ish tunes? A young guitarist from Toronto, Goodman gets his opener, Acrobat, off to a slow start with those familiar squeaks of hands on the neck of the guitar. The other musicians chip in their own sounds, exploring textures, until they find t ...