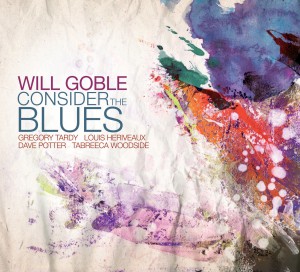 For his second recording as a leader, bassist Will Goble is joined by drummer Dave Potter, his long-time rhythm section mate in Jason Marsalis' Quartet, master saxophonist Greg Tardy and the Atlanta-based pianist Louis Heriveaux. Through arrangements of compositions by Mary Lou Williams and George Gershwin, and originals inspired by the 2015 Nepali earthquakes, racial injustice, and other emotion-charged events, Goble presents the blues as an aesthetic through which all people can make their stories known. From the opening "Another Man Gone Down," a traditional chain gang song with guest vocalist Tabreeca Woodside, to Goble's uptempo "The Ants Went Marching One By One But They Didn't Come Back," the blues are captured with a variety of outlooks, but always through the infinitely variable lens of swing.

Reviews of Consider the Blues

Midwest Review (Chris Spector)
This bass playing extended musical family member of the Marsalis clan shows he's not just another white boy with the blues. Using blues changes as his starting point and adding the jazz from there with other of his Marsalis band mates, Goble feels free to push creative envelopes to let the vibe wail. A solid session that plays with feeling and spi ...

Bird is the Worm (Dave Sumner)
An appealing hard bop sound from bassist Goble, finding that right mix of buoyant activity and melodic warmth. His quartet goes out of their way to prove that the inclusion of the word "blues" in the title is anything but misleading. The up-tempo tunes are plenty fun, but it's when the quartet slows things down and really lets the melody patientl ...

BeBop Spoken Here (UK) (Lance Liddle)
Another Man Done Gone, a traditional chain gang song features guest singer Tabreeca Woodside who brings a Nina Simone feel to this protest song. A voice ideally suited to the material. Tardy shows on tenor. However, it's on Johnson's Magic Umbrella where Tardy shows that he's anything but tardy when it comes to dealing out a mind-blowing tenor sol ...

The Jazz Owl (Travis Rogers, Jr.)
Consider the Blues is bassist and composer/arranger Will Goble's second release as a leader. This album (Origin/OA2 22132) was written in 2015 with this very line-up in mind. Goble had performed with them in 2013 and "knew immediately that I wanted to record with this quartet." And what a quartet! Joining Goble is his "long-time partner in crime ...

Cadence (Robert D. Rusch)
CONSIDER THE BLUES is a solid blues bop session recorded 9/5&6/15. The 11 tracks [61:56] are a mixture of 7 originals and standards but what got my attention was the opening track, track she appears on. Woodside is a new name to me, but judging from her brief appearance she seems "Another Man Done," sung by Tabreeca Woodside. This is the only impr ...

WTJU (Dave Rogers)
Bassist / composer Will Goble offers his second disc as a leader and he is focused here upon the grandeur, the grit and the power and influence of the blues. Goble had played for some time with Jason Marsalis and tapped his former partner in that rhythm section, Dave Potter to play drums. He had also previously played with pianist Louis Heriveaux a ...

Jazz Weekly (George W. Harris)
Bassist Will Goble delivers the blues in many dark and light hues here on a mix of originals, covers and traditional. He teams up with the thick tenor of Gregory Tardy, nimble piano for Louis Heriveaux and Dave Potter's simpatico drumming for some clever arrangements and deliveries. The post bop original "Johnson's Magic Umbrella" has some Monkish ...

New York City Jazz Record (Ken Dryden)
Bassist Will Goble offers a heavy dose of blues on Consider The Blues, his second CD as a leader, featuring thoughtful arrangements of folk songs, reworkings of standards and classic jazz works, along with his creative originals. His band for this session includes Tardy, pianist Louis Heriveaux and frequent collaborator Dave Potter on drums. The ...

LEARN MORE ABOUT
Will Goble