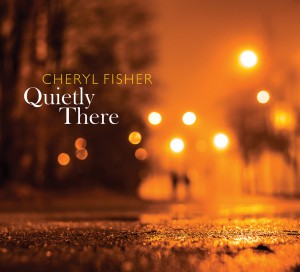 ...vocal command that deepens with each recording.
-Washington Post

For her sixth CD, Canadian vocalist Cheryl Fisher has recorded an album unique in both its repertoire and her approach. Purposefully chosen to be on the quieter side, Fisher puts a personal stamp on these beautiful, rarely heard songs, applying her musicianship and gift for vocal interpretation in celebration of love, or the mourning of love lost. Although they come from the era of the Great American Songbook, Fisher has given them a modern jazz treatment with the brilliant accompaniment of pianist/arranger John Toomey, the singular Portland guitarist John Stowell, the bass & drum team of Jeff Johnson & John Bishop, and acclaimed woodwind artist Eric Allison. "Concept albums aren't what I usually do, but sometimes you just want to sit by the fireplace, have a glass of wine, put on an album and let it play right through, letting its mellow mood merge with your own."

Reviews of Quietly There

Midwest Review (Chris Spector)
Picking songs that are well known but not well worn, jazz singer Fisher does a reversal on the usual jazz diva route by making a quiet album of songs you think you know as opposed to giving Cole Porter more over exposure. With composers that rank well above chopped liver represented here, this is a quiet album for quiet times when you want to shut ...

Jazz Weekly (George W. Harris)
Cheryl Fisher has a clear and sultry tone on this album of covers. Along with Eric Allison/wwinds, John Toomey/p-key, John Stowell/g, Jeff Johnson/b, Burnis stubbs/perc and Bob Tildesley/tp, she brings her easy on the ears vibrato to "Quietly There" and softly growls on "It Amazes Me.' She's able to give a dramatic feel to the modal "Flowers In Th ...

Cadence (Robert Rusch)
CHERYL FISHER's [voc] latest CD is QUIETLY THERE [OA2 22133]. Fisher has chosen 12 songs [54:33] for mood and meaning. Her concept was to create an album for a mellow mood, an "album, letting its mellow mood merge with your own" which may be possible if you don't pay attention to the lyrics where the meaning doesn't make one think mellow, but rathe ...

Cadence (Jerome Wilson)
Cheryl Fisher's voice exudes mature subtlety. Her sound is sensitive and well-formed and she's adept in making what she sings sound convincing in the manner of one of her mentors, Shirley Horn. Her instrumental support changes from track to track here. John Stowell provides deep electric guitar buzz to the tumbling "Flowers In The Sink" and a li ...