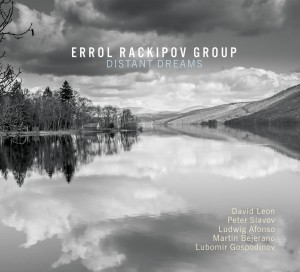 ...his compositions combine modern jazz and classical elements with the influence of Bulgarian folk music, and his multifaceted arrangements move becomingly from refined lyricism to spirited exaltation...This is a must hear project.
Scott Albin, Amazon

The music of Distant Dreams is a continuation of the journey the Bulgarian vibraphonist began with his debut recording, Pictures from a Train Window, where many of the compositions are influenced by the rhythms and melodies of Eastern European folk music, but viewed through modern jazz aesthetics. Mentored and influenced by vibes icons Gary Burton and Ed Saindon, Rackipov's rich eclecticism and life experiences provided him the platform for defining his own space in the elite mallet performance world.

"This is a group to be enjoyed for years and years. The right personalities and skill-sets and talents have coalesced into one of the finest debut albums of recent memory." - Travis Rogers, Jr.

KNKX - Seattle (Abe Beeson)
Another new release from an international star on this week's show comes from a vibraphone player from Eastern Europe, "I'm from Bulgaria, I guess a lot of the influence…you can hear a lot of influence in these tunes." That's Errol Rackipov talking about the music he wrote and plays with his band, which pushes his early musical influences into mo ...

Midwest Record (Chris Spector)
The vibes player comes in with a date that has a vague Brazilian patina to it that you can't put your finger on. That's because it's jazz inspired by Bulgarian folk music. Bristling with the kind of energy you enjoy when you make a zesty, new discovery, this set is sure to be always welcome in your ear the more you play it. The kind of jazz that ga ...

Radio Bulgaria (Lyudmil Fotev)
30 years ago a young vibraphonist dreamt of the Berklee College of Music and the school of Gary Burton. A few days ago he discovered the same vibraphone in the same studio on the BNR, where he recorded his demo for Berklee at the time. This time he brought with him another of his albums, with words of dedication writeen on the cover by this same Ga ...

Improvijazzation (Dick Metcalf)
There's really nothing "distant" about Errol's superb jazz vibraphone work on this excellent release… I've loved his work ever since I reviewed his group in issue # 155, and this album makes that impression even stronger… he's joined by a stellar cast of players… Lubomir Gospodinov – Tenor sax and Soprano sax; David Leon – Alto sax; Marti ...

Muszeroldal (Budapest) (Rudolf Radnai)
There are two good photos on the outside, a reservoir or a detail of a highway, and for me, Keruac comes to my mind. He looks at us with a cheerful man in the interior of the cover, and this joy, positive thinking is immediately reflected in the music. The vibraphone and marimba give a foundation to the other, somewhat more conservative instruments ...