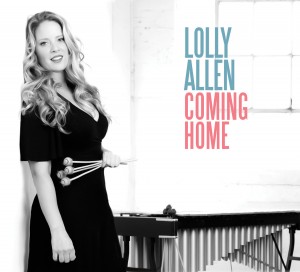 With the satisfying musical journey presented on "Coming Home," the young vibraphonist has become a rising bandleader to watch.
DOWNBEAT

With inspiration provided by myriad jazz masters and the Los Angeles musicians she surrounds herself with, vibist Lolly Allen creates a warm, swinging, and jubilant set of music on Coming Home. Opening with Horace Silver's "The Hippest Cat in Hollywood," she celebrates the LA jazz scene that developed out of the flourishing Central Ave clubs of the '50s. Surrounding herself with revered veterans of the scene, such as drummer Paul Kreibich and pianist Tom Owens, and young, vital members of the next generation, including pianist Josh Nelson and saxophonist Danny Janklow, Lolly delivers invigorated perspectives of the quintet group dynamic. Classics like Mario Bauza's "Mambo Inn" and Dizzy Gillespie's "Bebop" are paired with Allen's originals, "Little Hummingbird" and the title cut, in a seamless blend of supple ideas and renewed approaches to traditional repertoire.

Midwest Records (Chris Spector)
Firmly in the now with admirers on the Nelson/Koonse axis, Allen hits it out of the park as she hammers her point home swingingly and gracefully. A tasty romp throughout, this classic in the making is a jazzy joy for all.​ ...

JazzHalo (Belgium) (Georges Tonla Briquet)
It was Horace Silver who at the time penned 'The Hippest Cat In Hollywood' (here the opening track). Vibraphonist Lolly Allen fulfills that role with verve without tilting to camp or kitsch. "Straight jazz" coupled with Mancini traits, Brasiliana and West Coast cool performed by a stylish cast. Music that sounds like from the era when Alan Ladd and ...

L.A. Jazz Scene (Scott Yanow)
During the past few years, Lolly Allen has developed into one of the most promising vibraphonists in jazz. While one can occasionally hear the inspiration of other vibraphonists in her playing (such as Milt Jackson, Terry Gibbs and Gary Burton), she has developed her own style and approach to performing straight ahead jazz. Coming Home, her seco ...

Jazz Weekly (George W. Harris)
Vibist Lolly Allen mixes and matches in a variety of swinging settings with the core of saxist Danny Janklow and bassist Jordan Richards along with some of LA's finest in Josh Nelson-Tom Owens/p, Paul Kreibich-Kendall Kay/dr, Larry Koonse/g, Carl Saunders/tp, Scott Whitfield/tb and Adam Schroeder/bs. The quintet team with Janklow as some boogalooin ...

DownBeat (Suzanne Lorge)
3 1/2 STARS On Lolly Allen's infectiously jocund Coming Home, the vibraphonist recalls the 1950s club scene in Los Angeles with bright remakes of tunes like Horace Silver's "The Hippest Cat In Hollywood" and Dizzy Gillespie's "Bebop." But Allen has her own view of L.A. jazz: Her originals—like the bracing "Little Hummingbird" and the colorful ti ...

Roots Music Review (Robert Silverstein)
4-STARS Origin Records offshoot label OA2 released coming home from vibist / bandleader / composer Lolly Allen. This NY native living in L.A. covers the classics and adds in some of her own on her 2019 album Coming Home. Not the most original album title ever, the music is a total gas. Recorded in L.A. in 2016, the ten track CD finally sees a rele ...

JazzdaGama (Raul da Gama)
Mallet percussionists – rarely called upon to timpanists or performers on glockenspiels and other tuned drums – have lurked in the shadows of philharmonic and symphonic orchestras for generations despite the fact that – principally in popular music – a superstar has shone bright as he or she blazed their way across the musical firmament. Th ...

Cadence (Larry Hollis)
While perusing an online radio chart it came to my attention that nestled among all of the usual suspects and their respective releases was an album on the Origin subsidiary OA2 entitled Coming Home by a certain Lolly Allen. Her name was entirely new to me yet the said issue had attained the number four spot on the listing. After re-checking my "to ...

JAZZIZ (Jon Garelick)
Lolly Allen's first audition as a jazz vibraphonist was not propitious. She was a high school student in upstate New York, attending a summer band camp run by the prestigious Eastman School of Music. For her placement audition, the call was for Thelonious Monk's "Straight, No Chaser." Allen recalls, "It did not sound good." It wasn't just that s ...