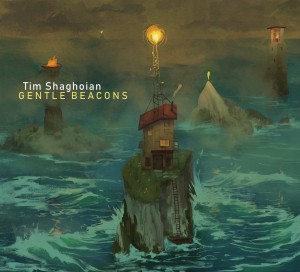 ...a cohesive focus, with a sound not unlike that found on ECM Records by the likes of saxophonist Trygve Seim and the Tord Gustavsen Quartet. Not a bad way to begin a recording career.
Dan McClenaghan, All About Jazz

With a lyrical modern jazz sensibility, saxophonist/composer Tim Shaghoian's debut album is a thoughtful exploration of hope and wonder. Speaking to the beauty of human connection and grappling with the emotional fallout from loss, Shaghoian's compositions developed as gentle beacons guiding him toward a sense of clarity in understanding life events that have impacted him most. His nine original compositions, performed by his California-based quintet of guitarist Chris Janzen, pianist Kevin Person Jr., bassist Richard Giddens, and drummer Antonio Montañez, dance with subtle shifts of emotion while song-like melodies are framed in unexpected rhythmic and harmonic structures. The album was produced by modern jazz luminary Peter Epstein, a longtime mentor of Shaghoian's.

All music composed by Tim Shaghoian, except (5) Victor Young/Ned Washington

All About Jazz (Dan McClenaghan)
Considering music with origins in California's San Joaquin Valley, the names most likely to come to mind are Merle Haggard and Buck Owens, an American music that adopted the name the "Bakersfield Sound." But up the road apiece in Fresno—about a hundred miles north of Bakersfield on Highway 99—a different style of American music, jazz, is sprout ...

Jazz Weekly (George W Harris)
Tenor saxist Tim Shaghoian creates fluffy forms with his horn leading the way on his originals plus a standard with Chris Janzen/g, Kevin Person/p, Richard Lloyd Giddens/b and Antonio Montanez/dr. The team works well as a unit, doing some clever stop-starts on "Old Haven in the Waves" with sax and drums getting intricate on "Flying Hat" and the two ...