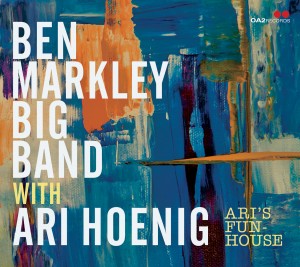 As the title suggests, this is fun to listen to and will eventually wind up as one of 2022's best Big Band recordings!
Arturo Gomez, KUVO

Whether through his recordings with players like Terell Stafford, Greg Osby or Joel Frahm, or his big band recording honoring the music of Cedar Walton, pianist/composer/arranger Ben Markley always provides a platform where his guests can shine. Long appreciating the idiosyncratic rhythmic mastery of drummer Ari Hoenig, along with the equally personal melodic sense of his compositions, Markley was inspired to take on the daunting task of arranging a set of Hoenig's music for big band. With roots in the traditional big band world, the music dives deeply into other modes of modern expression, which the Denver-based ensemble brought their A-game for. A session that demanded a high level musicianship and abundant sense of creative adventure, the results provide an aural ride that can best be described as Ari's Funhouse.

KUVO New Music (Arturo Gomez)
Philadelphia-born drummer Ari Hoenig has firmly established himself in music with over a dozen recordings as a leader plus many more as an accompanist on many other sessions. He also has become a leading award-winning educator and is currently on the faculty of New York University (NYU). One of the leading pianists along the Front Range is Ben Mark ...

BeBop Spoken Here (Russell)
Gigging in and around Denver, Colorado, composer, arranger, pianist, band leader, side man and tutor, Ben Markley is a busy man. One of his projects has recently come to fruition. Following a first gig working alongside Ari Hoenig, Markley asked the New York-based drummer if he could arrange some of his compositions for big band. Hoenig liked the i ...

DownBeat (Ed Enright)
Editor's Pick / 4-STARS Pianist-composer-arranger Ben Markley completely immersed himself in the music of drummer Ari Hoenig in conceiving and orchestrating Ari's Funhouse, a big band celebration that's as thrilling and cool as taking a deep dive in someone else's pool. Markley and his marauding crew had permission to pool-hop, of course; they eve ...

Jazz Weekly (George W Harris)
Pianist/keyboardist Ben Markley leads a 17 piece big band through seven original pieces, all filled with impressive and creative section work and well delivered solos. The horns are big, bold and brassy as they punch through solos by Will Swindler/as and drummer Ari Hoenig on "Birdless" while the leader swings around Hoenig's shuffle on "Bert's Pla ...

Take Effect (Tom Haugen)
The composer, arranger and pianist Ben Markley brings along a large handful of musicians for this occasion, including the drum extraordinaire Ari Hoenig, and it results in 7 giant, boisterous and solo filled tunes. "Birdless" starts the listen with bright brass alongside swift keys and Steve Kovalcheck's intricate guitar that makes an indelible ...