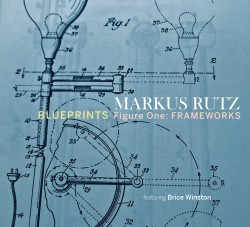 After Roy Hargrove passed away, I have been wondering which trumpet artists would become my "go-tos" for the swinging and sensitive playing I became used to when Roy held sway. There are many candidates, but one has unexpectantly emerged, the Chicago-based Markus Rutz. I say "unexpectantly" because until I heard his recent recording Blueprints - Figure One: Frameworks I was barely aware of his existence, much less his talent. A veteran player, Rutz has appeared in local clubs and his popularity is evident in New York City, where he has a nice performing relationship with Club Bonafide on 52nd Street. In fact, a press release pronounced a January 2020 appearance there as a "Chicago Release Concert."

Hopefully, when more people give a listen to Blueprints, any lack of awareness like mine will change. Rutz's deep-toned horn creates the intimate ambiance for the entire album, making it an enjoyable and easy listening experience. As a whole, Blueprints sounds like a well-proportioned, near-casual collection of live performances in the studio. A tip of the proverbial hat goes to Rutz and bassist Marcos Varela as producers, with Vijay Tellis-Nayak (stellar again) and Tyler Rice's recording expertise at Transient Sound.

But don't mistake my remark for this being "easy listening" music. The jazz elements Rutz creates in his arrangements catch the keen jazz partaker's interest from the get-go. Not too many records have a drum solo and a bass solo significantly adorning the first two selections. Yet here, we have it. "The Compass," a tribute to Rutz's mother, starts things off in a soft Latinesque-bop fashion, with Rutz and key contributor Brice Winston on sax teaming up on the melody, then Winston and guitarist Matt Gold soloing, before Xavier Breaker, one of two drummers on the album, provides a nifty, slightly understated expression that seamlessly carries the rhythm to a satisfying end. Another tribute, this time to bassist Richard Davis, "The Musicianer," features Varela, who also enjoys NYC recognition for his worldwide activity. Here, his lovely tone and deft plucking adds significant eloquence to this statement, and uplifts others throughout. Rutz steps up front for the first time, and rides Varela's walking bass with a "Sweets" Edison-like panache.

The pacing of Blueprints based on percussion—or the lack of it—is another feature of the album's listenability. Between "The Compass" and the fifth piece, "Limbo," the group is percussion-free or light, a grand statement for how jazz musicians are gifted self-rhythmic artists. The particular example occurs on "Gusto, as in Mucho," where Heitor Garcia on conga is the lone percussionist, while the musicians navigate changes from salsa to swing, and back.

It was Rutz's delivery on the ballad "Very Marie" that made me think of Hargrove. Rutz, here, waxes lyrical in a way I hadn't heard since Roy visited Chicago his last time. And the upper-registered, but serene, expression on one of the album's two covers, a spritely "September in the Rain," also struck me as Hargrove-like.

Rutz and Winston play a lot in tandem during their time together here, and that teamwork is meshed adroitly with Winston's full-bodied soloing on the hard bop "Limbo" and another tribute song, "Syndrome," this time remembering the late patriarch Ellis Marsalis.

And Chicago pianist Adrian Ruiz has a real presence, adding a nifty-noted, swing solo to "The Musicianer," traveling the keyboard on "Gusto...," exquisitely melding with Rutz in their duets "Very Marie" and "Shipmates," and comping with style on "September..." and the closer, Charlie Parker's "Segment," where the swing element is in full bloom, with drummer Marcus Evans providing quietly invigorating backup.

With Blueprints, his fourth album, Markus Rutz has fashioned a post-Hargrove presence and awareness of his talent. A planned 2020 release could easily vault him further into the national spotlight. He has certainly lifted himself and his friends into the upper level of my CD stack.

Other Reviews of
"Blueprints - Figure One: Frameworks":