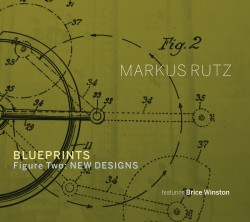 These days, sometimes people need something that entices them—no, forces them—to breathe deep and relax. Music is often one way to achieve that. In listening to trumpeter Markus Rutz's second Blueprints album, Figure Two: New Designs, I realized Rutz and his band have provided a pleasing soundtrack to my need to defuse and wind down from the anxiety of the times, but without giving up my jazz imagination.

Given that the bulk of this music was recorded at the same time Rutz's first Blueprints album was, those who enjoyed Figure One will no doubt find pleasure and an outlet with Figure Two. A notable exception this time around is an enticing live recording, which demonstrates this group's synthesis and advocates for its continuance.

Once again, Rutz establishes himself as a worthy representative of post-bop alacrity, while demonstrating how swing is manifested even without percussive support. Following a generally faithful rendition of McCoy Tyner's "Passion Dance," with an eerily Joe Henderson-like solo from gifted sax man Bryce Winston, the album proceeds into "East to West," one of three pieces that eschew drums or percussion. Here, with the sparse arrangement, Rutz ventures into Miles/Gil Evans-period territory, complemented by tasty work from guitarist Matt Gold and effective, understated comping via pianist Adrian Ruiz.

The second such song, "Looking Out Windows," typifies what I suggested in my previous review of Figure One: that Rutz is a worthy replacement for the late Roy Hargrove, who could play ballads like no one else. "Looking Out" is a duet with Ruiz, and nothing is rushed, providing breathing room for both player and listener. Rutz's expression is serene and precise, without leaving out the soul. This lovely tune is ironically followed by Frank Foster's "Simone," which Rutz first encountered on a Foster duet album. In this case, the band comes along for the ride, and the easy cadence of the opening gradually gives way to a mid-tempo treatment, featuring the walking lead of bassist Marcos Varela, who gets an earned solo in the midst before drummer Marcus Evans follows with his own swinging interlude.

Whether or not these relatively austere performances are of the "New Designs," Rutz proves himself to be capable of pulling off pretty much everything he tries, even the unusual choice of a cuica solo by Heitor Garcia during "A Cidade do Vento," a composition inspired by Sting's "An Englishman in New York." A loping Latin rhythm, enhanced by Rutz's melodic musing and Varela's bass, leads to Garcia's initial cuica insertion. The tunings of this friction drum and the trumpet created a seamless transition that fooled me initially; I thought, without reading Rutz's commentary, that Markus was trying a Clark Terry mouthpiece antic. Later, after solos by Ruiz and Varela, in a return to the melody Garcia supplants Rutz in a call-and-response segment.

The other generally full-band material is consistently fulfilling. "Shipmates" features Winston's soprano within a typical Rutzian democratic arrangement. "The Musicianer" features Varela on the melody, rendered assuredly before Rutz takes over with an ample amount of swing.

The album ends with a live recording from the Blueprints Figure One album release concert from autumn 2019, which seems like a decade ago. "Keppard's Kerchief" is a tribute to the late Freddie Hubbard, who concealed his technique by use of a handkerchief. This composition and performance would easily fit into one of those classic Blue Note albums featuring the great trumpeter. Not too pushy, the post-bop swing is bolstered by Varela and drummer Xavier Breaker's brush strokes that gradually get replaced by the sticks, moving into a harder blues. It's a reminder that we really miss live performance.

If you like this stuff, just get both albums, upload them into your favorite listening device, and hit "shuffle." The consistency and general harmony of all the material will lull you into a sense of well being we all need, at least from our music, in this vexed era. Thanks to Markus Rutz and his pals for providing this musical relief.