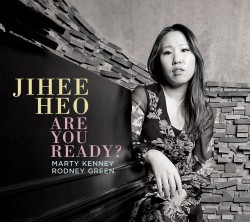 4 STARS Since arriving in New York from Incheon, South Korea, via studies in Amsterdam, pianist/composer Jihee Heo has made a name for herself through a broad spectrum on the jazz scene in Gotham. Heo's debut album, Passion (Heonah Music, 2015), featured strong compositions and arrangements for large ensemble, with experimental elements sprinkled in the mix. With her new release, Are You Ready? , she breaks down her artistic voice to the piano trio, employing dynamic drummer Rodney Green, and bassist Marty Kenney to join her in the venture. Rapper Saidu Ezike guests on one track. Released on the highly regarded Origin/OA2 label, the trio session promises to open ears on an international scale.

Heo's eight original compositions are inspired by painter Robert Henri's treatise for artists, "The Art Spirit." Reciting passages on the opener, "Are You Ready," is only a surface view into Heo's connection with Henri's progressive insights into a new form of realism that is more graphic in nature, bold in subject, and very much in the moment. Henri had come to view his former fondness for Impressionism as "the new academicism," seeing it as mere surface art. He created a movement that dealt more in stark images that were akin to the realist literature of the early twentieth century, and the new age of investigative journalism that exposed the down to earth realities of modern human life.

Heo's voice as a pianist comes to life on "Blurring the Blues," a smart arrangement of the blues that features her percussive left hand laying down the framework of this rousing piece. Kenney offers a strong solo that in many ways personifies his role throughout the eight compositions as a continual musical highlight. Heo's approach to improvisation is clearly melody based, rarely falling back on indulgences into her virtuosity.

"Streams in the Desert" fully embraces Henri's conception of artistry, in the form of swinging, stark jazz realism, avoiding the light, dabbing touch of musical impressionism. Fluid single note runs join colorful chordal voicings, as Heo establishes where this unit fits into the great tradition of the jazz trio. With Green and Kenney providing an open canvas for the pianist, she demonstrates her penchant for coloring melodic statements with chordal clusters in understated, but resounding fashion. The sound is very reminiscent of Ahmad Jamal's trio with Israel Crosby and Vernel Fournier.

"Trust" features rapper Ezike, and reads as Heo's ode to New York. She refers to her experiences as an Asian woman on the scene in New York, and how her life and art experiences collide. Overcoming the obstacles of societal misogyny and racism, in concert with those same obstacles in the jazz world, provides riveting commentary about her complicated love affair with the city. Ezike's narrative continually bounces off Heo's notion with the throughline, "I'm in New York, but this city of dreams ain't as good as it seems."

Heo largely gives way to her bandmates on the thematic folk tale, "Oh New York." Green's beautiful brush work sheds light on Kenney's brilliant solo. Green's drum solo resounds through Heo's rhythmic comping that feels like a nod in earnest from the bandleader to the fine, supportive playing of her trio.

Heo puts the finishing touches on her collection of eight originals with the nostalgic solo piece, "Letter to a Little Girl." Providing the listener with perhaps her most visual playing on the album, she plays as if she is finding a connection to her child spirit, and recognizing that faint image across time as being her own. It is a fitting ending to this album of emotional resonance.

Other Reviews of
"Are You Ready?":

The Answer is in the Beat, WCBN by Paul Simpson