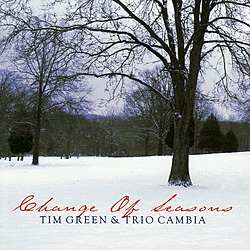 Chicago pianist Tim Green had already released a few excellent albums on the Origin label when Change of Seasons was produced. What is different about Change of Seasons? A couple of things. The first is a tight focus on Christmas music, with a handful of traditional pieces heavily reworked in a piano jazz trio setting with a bit of a kick, and a handful of pieces that are more tangentially related to Christmas (Vince Guaraldi's "Linus and Lucy"; "Everything's Alright" from Jesus Christ Superstar). Beyond the content itself, the band takes the idea of a rotating trio to a new level. As they move from track to track, the bandmembers rotate their instruments. Nominal leader Tim Green opens and closes the album on bass, but fills in the middle on piano. Mark Maegdlin plays the piano for much of the album, but moves to drums when Green is on the ivories. Jake Vinsel plays the bass when Green is on piano, playing drums the rest of the time. All are extremely proficient on both of their chosen instruments, changing the dynamic of the music somewhat on the fly. The arrangements are nearly universally surprising, presenting old songs from new angles and showcasing the players' exceptional abilities. With innovation in arrangement, in band makeup, and in general performance, this album becomes an easy choice for anyone looking for something a little newer for Christmas listening.

The Davis Enterprise by Derrick Bang