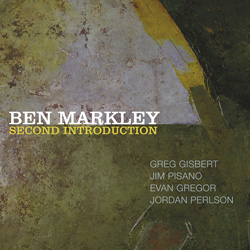 Denver pianist/composer Ben Markley offers his second discographical entry on the fine (and aptly-titled), Second Introduction, comprising seven of his own modern Bop compositions side by side with one standard. Markley has also assembled a superlative quintet, including his rhythm team from his self-released debut (Spealio), bassist Evan Gregor, and drummer Jordan Perlson, alongside top-shelf vets, trumpeter Greg Gisbert, and tenor Jim Pisano. From the outset, this program proves both musically enticing and compositionally engaging, starting with the mercurial "5/20," highlighting Gisbert/Pisano's unison line skirmishes amidst the aerated groove. Keeping things on a high energy level, "Dry" offers a snappy, Latinish scamper kicked mightily by the efficacious Perlson. Markley also takes center stage on the shuffling ode to Cedar Walton, "One For Cedar," though Perlson once again steps in as the record's MVP after thrilling solos from Gisbert and coool-toned Pisano. The group continues to walk on the path of traditional structures with keen harmonic and rhythmic sensibilities on the swinging Blues with the edgy "The 9th One's Free," the exultant "As It Goes," and the closing Hard Bop exploits of "Two To Go," highlighted once again by Perlson's energetic beats. Of course, despite his excellent group musings, Markley's refined solo credentials are observed throughout, with arguably his best work on the laid-back waters, like the lusciousness of the old chestnut "But Beautiful," as well as the gentle waltz of "And The Wind Came." Second Introduction, then, proves to be an auspicious second record from Markley that leaves one with the sense that there are more endeavors to come.

The Voice, Sacramento by Dick Crockett