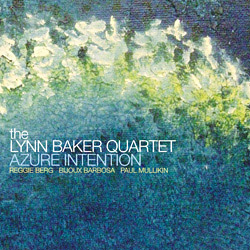 Saxophonist Lynn Baker has been a fixture in the Denver jazz scene for nearly 20 years, so don't beat yourself up if the name doesn't ring a bell. The work he's put in over that time has culminated in this largely solid recording of eight original tunes.

Whether on tenor or soprano, Baker's tone is light with just a hint of vibrato. He glides effortlessly through melodies, best exemplified on the ballad "Lament," one of the disc's strongest pieces. Even on a harder-driving piece such as "Into the Blues," Baker's attack is always well balanced and clearly articulated. Baker's bandmates are in full sympathy with his approach, particularly pianist Reggie Berg, whose light touch and lush chords float along with Baker's fluid lines.

Given Baker's style, it's the more contemplative pieces, such as "David's Tune" and the title track, that best allow him to dig into a tune and express himself fully. But not everything here works. The calypso-inspired "Happy New Year" comes off rather stiff - more like forced fun than a burst of joy. And the multifaceted "Spinning," though interesting in parts, seems more like an academic exercise in counterpoint and shifting meters.

Even some of the better pices have a somewhat clinical feel about them, possibly becuase these tracks went through such a lengthy gestation period before Baker committed them to record. But Baker has an engaging style, and it will be interesting to hear him tackle less familiar material in the future.