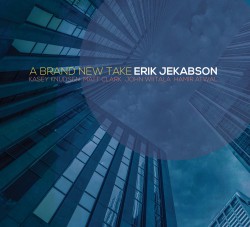 Over the last decade, trumpeter Erik Jekabson has established himself as one of the leading lights of post-bop jazz in the San Francisco area. A native of Berkeley, California, Jekabson studied jazz and classical composition, first at the Oberlin Conservatory, and later at the San Francisco Conservatory of Music. As a professional, he divides his time between performing and teaching in the Bay Area, including at the California Jazz Conservatory. While acoustic modern jazz is Jekabson's forte, his albums are anything but stylistically homogeneous, with forays into Latin rhythms, electric funk, and chamber string music. On his sophisticated 2016 effort, A Brand New Take, Jekabson takes a more streamlined (to borrow one of his song titles) approach to his robustly delivered, imaginatively arranged straight-ahead jazz. Joining Jekabson are his longtime associates saxophonist Kasey Knudsen, pianist Matt Clark, bassist John Wiitala, and drummer Hamir Atwal. Also featured are saxophonist Dave Ellis and trombonist John Gove. Together, they play a style of jazz that falls somewhere in between the expansive late-'60s work of trumpeter Kenny Dorham and the romantic '50s West Coast approach of Chet Baker. In fact, Jekabson tackles Baker's most closely associated standard, "My Funny Valentine." However, rather than playing the ballad like Baker did, he instead frames the yearning melody with a '70s-style electric piano and a funky, tango-sounding rhythmic figure. Later, Jekabson draws the connection more explicitly with the inclusion of his ruminative composition "Chettie." More ECM in tone than Pacific Jazz, the track is a perfect blend of Jekabson's influences, his lyrical trumpet lines set against a circular, Steve Reich-ian harmonic bed. Elsewhere, he takes a similarly unexpected approach, transforming Michael Jackson's classic "Thriller" into a propulsive, '70s-style jazz-funk number that's equal parts Herbie Hancock and Maynard Ferguson. Jekabson's other original tunes are equally engaging, with tracks like the buoyant opener "Streamlined," the noir-ish "Morning, Sunshine," and the jaunty title track showcasing his knack for inventive, warm acoustic jazz. There are even two classically tinged group improvisations in which Jekabson credits his bandmates as co-writers, a choice that backs up the notion that they were indeed improvised freely in the studio. Ultimately, this kind of creative largesse, backed up by Jekabson's holistic approach to the jazz tradition, helps makes A Brand New Take feel both comfortably familiar and utterly fresh.

Other Reviews of
"A Brand New Take":