MUSIC REVIEW BY David Orthmann, All About Jazz 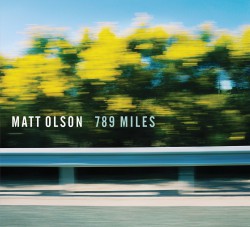 One of the most interesting things about tenor saxophonist Matt Olson's 789 Miles is something it lacks: An anxious, overriding eagerness to impress or knock the listener out at every turn. Instead, the record virtually looks you in the eye, shakes your hand, and then cordially invites you along for the ride. Olson, Hammond B-3 organist Mike Kocour and drummer Dom Moio, who comprise one-half of the notable collaborative ensemble, Unhinged Sextet, are middle-aged jazzmen whose artistry and craft runs deep. They're not particularly interested in producing a record chock full of athleticism and brazen displays of technical prowess. Far better to offer nine tracks in which maturity, moderation and enthusiasm are evident in equal measure.

A primary strength of 789 Miles is the trio's ability to embrace and fully inhabit a program of diverse, engaging mainstream material written by Olson, his current and former students at Furman University, as well as one swing era standard. Another way of putting it is that the heads and ensemble work are every bit as interesting as the solos. When Olson interprets a melody or improvises, the three instruments are always in balance, each voice essential, as opposed to Kocour and Moio simply playing circumscribed roles while the leader's saxophone shines.

Regardless of the mood or ambiance, every track is vivid and clearly focused, offering the distinct impression that the record is constantly renewing itself. Particularly rewarding is the movement from the jaunty, optimistic jazz waltz "Alberta Clipper," to the pensive, comparatively closed world of Olson's unaccompanied saxophone on "789 Miles," to the irresistible, soul-jazz swagger of "Dance of the Dragonflies."

An abundance of telling details serve to animate the record as a whole. Kocour plays the bass pedals only for most the head of "Stompin' at the Savoy," and then introduces chords on the tune's bridge which nicely envelop Otto's tenor, thus adding an extra bit of oomph to the music. The organist subtly replies to some of Olson's phrases during "Highway 538." Throughout the disc (particularly the heads of "Gyrate," "Alberta Clipper," "Dance of the Dragonflies" and "Stompin' at the Savoy") Moio places snare and bass drum accents exactly where they'll do the most good. Conversely, his brushwork on the ballads "The Space Between" and "Highway 538" is—appropriately—more felt than heard. As if to emphasize the proximity of jazz generations, Olson inserts a quote from Bud Powell's "Parisian Thoroughfare" at the onset of the second chorus of his "Stompin' at the Savoy" solo.

As an improviser, Olson is a raconteur who integrates a touch of soul into a commanding voice that never turns blunt or overbearing. Amidst the persistent throb of Kocour's bass pedals cycling between a shuffle and straight-ahead swing, Olson's "Dance of the Dragonflies" solo doesn't need to walk the bar to make a startling impact. Avoiding vulgarity or excess of any kind, he speaks plainly, with a fair amount of emphasis, and seasons the performance with a few rhetorical tricks. Working without a steady pulse, apparent song form or an obvious harmonic structure to lean on, Olson's turn on the title track thoughtfully searches and makes it clear that it's the journey that matters, not the destination. Over Moio's rhumba rhythms and judicious accents during the head of "Kything," the leader's tenor evinces an appealing vulnerability before turning muscular during the course of the solo.

Minus the distractions caused by noisy patrons and servers, 789 Miles is reminiscent of a rousing, variegated club set. The materials and methods employed by Olson, Kocour and Moio may be somewhat familiar, but in the end, there are too many good things going on here to worry over influences or retreat to the security of convenient labels.

All About Jazz by Mark Sullivan