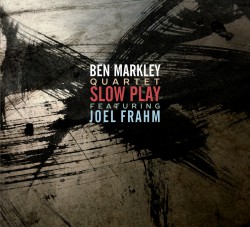 EDITOR'S PICK In the liner notes to his new quartet album, Slow Play, pianist Ben Markley proudly cites pianist Cedar Walton (1934-2013) as one of his key influences. The disc is a follow-up to the Ben Markley Big Band's Clockwise: The Music Of Cedar Walton (OA2), which received a 4-star review in the July 2017 issue of DownBeat. On his current project, Markley incorporates Walton's strong sense of melodicism into a program of eight highly satisfying original compositions. Markley, the director of jazz studies at the University of Wyoming, recorded the album at Denver's Mighty Fine Studios. His stellar bandmates are musicians with whom he previously had collaborated, and he wrote the tunes with them in mind: bassist Marty Kenney, drummer Jim White and monster saxophonist Joel Frahm. Conga player Andy Wheelock (who is also on the faculty at UW) adds intriguing Latin textures to two tracks: "Max's Mission" and "One For Armando."

Deep grooves, sweet swing and dynamic interplay are all essential ingredients in this program. On the songs that evolve into blowing vehicles for Frahm—such as the nine-minute "'Mon Back"—he delivers a tenor tone that is brawny yet beauteous, offering solos full of feeling and free of extraneous notes while reinforcing the overall compositional structure. On the ballad "Sentience," White switches to brushes and Frahm picks up a soprano, etching lines that are compelling and never cloying. On the sly, slinky "The Return OF Catboy," Frahm cleverly drops in a quote from Harold Arlen's "If I Only Had A Brain," and on "One For Armando," he briefly nods to "America" (from West Side Story). Throughout the program, Markley steers the ship but gives his bandmates room to roam. Toward the end of "Armando," the drums and conga dialogue with piano support reflects the leader's commitment to serving the song.

This album is one of those sparkling, straightahead gems that can convert pop fans into jazz acolytes.