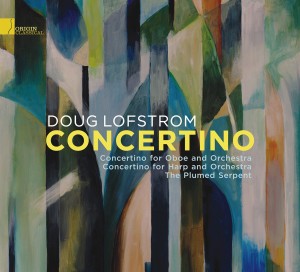 Concertino introduces three works from Chicago composer Doug Lofstrom. His virtuostic Concertinos for oboe (2006), and for harp (2009), were part of a commission initiated by conductor Kirk Muspratt and the New Philharmonic Orchestra, and premiered at DuPage University in 2007 and 2009. This version of "The Plumed Serpent" was recorded in 1982 with some of Chicago's finest classical and jazz performers. It was composed for brass with doubling woodwinds and strings, and soloists integrated in a jazz quintet.

All music composed by Doug Lofstrom

Reviews of Concertino: The Music Of Doug Lofstrom

Gramaphone (Laurence Vittes)
Chicago composer Doug Lofstrom has coupled first recordings of two modestly appealing orchestral concertinos for oboe and harp with an archival reprise of his Plumed Serpent studio fantasy from 30 years ago. There isn't much in either Concertino that hasn't been heard before - Richard Strauss and Hollywood musicals come to mind, though more svelt ...

Audiophile Audition (Daniel Coombs)
**** (4-stars) Composer and bassist Doug Lofstrom has been composing prolifically since the 1970s. His diverse scores reflect his ongoing involvement in theater, dance, film and symphonic music. In the 1990s, he was composer-in-residence for the Metropolis Symphony Orchestra and during the 80s, musical director of Chicago?s Free Street Theatre. Hi ...

Cadence (Robert Iannapollo)
Doug Lofstrom is a composer who is currently teaching at Columbia College Chicago. While the two main compositions on Concertino - Concertino For Oboe And Orchestra and Concertino for Harp And Orchestra, both 2011 - are both in the classical vein, it?s the third piece on the disc, ?The Plumed Serpent? (1982), that would most likely interest Cadenc ...