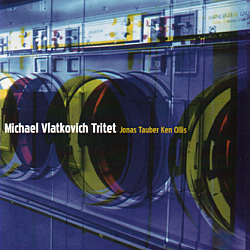 Well known in improvised music circles for 30 years, Los Angeles-bred (& now Portland-based) trombonist Michael Vlatkovich scales down his usual large Mingus-inspired group to explore the immediate intimacy of the trio. Along with the virtuostic Zurich-based bassist Jonas Tauber and Portland drummer Ken Ollis, Tritet's wide ranging program and orchestrations belie the expected limitations of the trio's instrumentation and keeps the recording interesting as well as inspiring. "...the depths of his imagination are so densely packed with the new and the fresh that listening to Vlatkovich blow is to hear improvisational jazz for the first time, every time." - The Weekly Alibi.

All About Jazz (Dan McClenaghan )
It's hard to say how the average jazz fan comes to an appreciation of improvised musicóand we're talking here spontaneous compositions, not merely an improvised solo in the middle of a mainstream song. One avid listener's introduction to the genre occured some years ago at a concert/lecture in a small state college auditorium. Two young musiciansób ...

All Music Guide (Adam Greenburg)
A deeply interesting album of progressive jazz from the Portland trombonist Michael Vlatkovich. Abandoning his usual big band, Vlatkovich instead takes up a small trio (actually a "tritet" by his own account) of bass, drums, and himself on trombone. Joining Vlatkovich in the trio are Swiss classically-oriented bassist Jonas Tauber, and fellow Portl ...

Cadence (David Dupont)
Michael Vlatkovich refers to his three-piece ensemble as a "tritet," maybe, I assume, to avoid the inevitable comparisons to all those other horn plus bass and drum trios. It's easy to see why. While that standard trio is typically used because of the openended freedom it allows, Vlatkovich's vision is more orchestral. True, the melodic material th ...