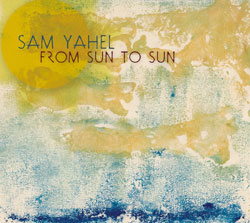 The music is fluid, flexible, all parts running together, the groove overwhelming.
-New York Times

After establishing himself as one of the world's foremost organists over the last decade, Sam Yahel showed off a new side in 2009 with a critically acclaimed piano trio recording that highlighted his broad musical interests and the dynamic interplay of his seasoned band. Now in their tenth year, bassist Matt Penman and drummer Jochen Rueckert again join Yahel as he engages with both the Hammond B3 and piano for an inspired album of fresh originals, and classics including "So in Love" and "A Beautiful Friendship." "...as elegant as anything you've ever heard from an organist. Larry Young would be proud." JazzTimes.

Reviews of From Sun to Sun

All Music Guide (Alex Henderson)
Throughout much of his career, Sam Yahel was described as "organist Sam Yahel." But when his 2009 recording, Hometown, became commercially available, one started hearing him described as "organist/pianist Sam Yahel." On Hometown, Yahel played the acoustic piano exclusively -- which came as a surprise to listeners who knew him for his organ-oriented ...

All About Jazz (Dan McClenaghan)
Sam Yahel made his name in jazz as an organist, notably on the excellent Truth and Beauty (Origin Records, 2009). In addition to a handful of well-received CDs under his own name, Yahel has worked his B3 Hammond magic on recordings by vocalist Norah Jones and saxophonist Joshua Redman. So it was something of a risk to return to his "original instru ...

New York Times (Nate Chinen)
During the final stretch of "From Sun to Sun" (Origin), his adept, engaging new album, the keyboardist Sam Yahel offers a glimpse of what might have been. Downhill-skiing through a pair of songbook standards ? "So in Love" and "Taking a Chance on Love," linked by an interlude with a classical tinge ? he plays crisply over fast-swinging rhythm, the ...

Audiophile Audition (Doug Simpson)
When he first came to the attention of jazz fans, keyboardist Sam Yahel became noteworthy as a Hammond B-3 player with a modern approach to his instrument, blending open-minded post-bop with traditionalist motivations and often breaking the mold of the sometimes stale jazz organ categorization. Recently, Yahel has moved forward by returning to his ...

The Jazz Word (John Barron)
Perhaps best known as a modern purveyor of the Hammond B3 organ, Sam Yahel is no slouch as a pianist. His latest release for Seattle's Origin Records, From Sun to Sun is a stunning example of a forward-thinking piano trio, emphasizing fresh, compositional nuances with deep-in-the-pocket grooves. Bassist Matt Penman and drummer Jochen Rueckert cr ...

Cadence (Stuart Kremsky)
After five albums on which he played only organ, Sam Yahel moved over to the piano bench for his last release on Origin, and he largely stays there for this new session. Yahel, joined once again by accomplished bassist Matt Penman and the ever tasteful drummer Jochen Rueckert, is insidiously charming on the free-flowing "2 Pilgrims" that opens the ...

Downbeat Magzine (John Ephland)
***1/2 stars This trio side has a lot going for it. There's a fetching lyrical quality to much of what keyboardist Sam Yahel offers on From Sun to Sun, and an experimental side as well. It has to be tough to parlay standards and originals in the classic, tried-and-true piano -trio format and still sound like yourself. Yahel plays ear-catching ...