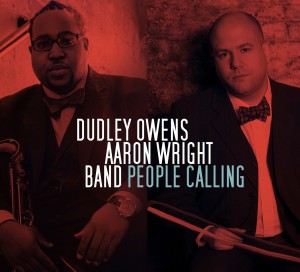 Dudley Owens will be one of the jazz greats.
-Donald Harrison

Over the last year, Chicago saxophonist Dudley Owens and New York bassist Aaron Immanuel Wright conceptualized the production of a new project that would have their modern compositions executed with strong "old-school" sonic qualities. More importantly, they set out to make instrumental music that reflects the powerful protest-based political changes going on in the world. The title track features Owens, Wright, and drummer Clif Wallace singing backgrounds that say, very simply, "oh, the people calling." The rest of the record ranges from soulful ballads such as Wright's "Magnolia" to "Book of Revelations," a burning, apocalyptic, modal exploration that makes use of the full quintet with Willerm Delisfort on piano and Justin Stanton on trumpet.

All About Jazz (Dan McClenaghan)
Owen Dudley / Aaron Wright Band's People Calling, in the best possible sense, doesn't settle into any category. The title tune, introduced early and reprised at the end of the disc, walks a line between the spirituality-steeped sound of saxophonist John Coltrane's classic sixties quartet and the soulful and catchy style of vocalist/songwriter/pr ...

Chicago Reader (Peter Margasak)
On the terrific new People Calling (Origin), this Chicago-New York four-piece taps into the "spiritual jazz" feel of John Coltrane's classic quartet, even chanting the words of the title track, a la "A Love Supreme." The new recording is a big leap forward for Chicago saxophonist Dudley Owens, whose 2009 debut album, Just the Beginning, tried ...

emusic Review (Dave Sumner)
Oh how I do love when a group manages to fuse a sense of danger into a set of pretty tunes. Recalling the talent of Clifford Jordan to bring together the roots of jazz and modern compositions, this quintet of tenor/soprano sax, trumpet, piano, double bass, and drums captures those same qualities for a very cool recording. It swings and it prowls, j ...

All About Jazz (C. Michael Bailey)
Saxophonist Dudley Owens and bassist Aaron Wright bring together (in classic quintet format) a band intent on expanding the language of Miles Davis's second great quintet from within. On People Calling the band does exactly this: they create a late '60s sonic image stamped in 21st Century digital. The writing is firmly post bop, with Atlantic per ...

Jazz Society of Oregon (Kyle O'Brien)
This disc was mastered in Corbett, Oregon, but the two main players are from Chicago and New York, respectively. Saxophonist Owens and bassist Wright lead this modern jazz outing. It's an introspective disc for the most part, full of ballads and burners, like the tender "Magnolia," the pensive "Prayer," and the slow sizzle "Book of Revelations." It ...