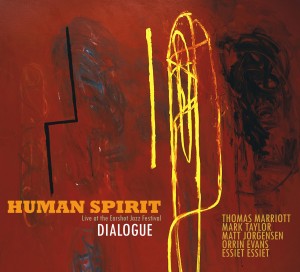 Jorgensen, Marriott and Taylor have a special genius for taking the standard jazz quintet ... and breathing new life into the format.
Dan McClenaghan, AllAboutJazz.com

With a combined 14 albums as leaders, and appearing on dozens more as sidemen, Thomas Marriott, Mark Taylor and Matt Jorgensen have put a strong stamp on the sound of modern jazz that has come out of Seattle and Origin Records over the last decade. Dialogue, their first release under the group name Human Spirit, features 8 original compositions recorded during a sold-out, two-night run at Tula's Jazz Club in Seattle during the 2011 Earshot Jazz Festival. Pushing the direction of the band further forward are special guests and frequent collaborators, pianist Orrin Evans and bassist Essiet Essiet.

All About Jazz (Dan McClenaghan)
The three players who now call themselves Human Spirit - drummer Matt Jorgensen, trumpeter Thomas Marriott and alto saxophonist Mark Taylor - have a very successful track record of recording together. They teamed up on Jorgensen's magnificent Tattooed by Passion (2010) and Another Morning (2008), and on Marriott's strange and splendid Crazy: The ...

Audiophile Audition (Jeff Krow)
****4-Stars Human Spirit continues to shine, this time in a live setting? Human Spirit is a band headed by Thomas Marriott, Mark Taylor, and Matt Jorgensen. Jorgensen's previous CD, Tattooed by Passion, was reviewed here in Oct 2011, and was in my top 10 CDs of that year. It was a tribute to his father-in-law, noted painter Dale Chisman. We ...

Jazz Truth (George Colligan)
Human Spirit is a Seattle based jazz group which I have had the pleasure of performing with a handful of times in the past year or so. Their new CD entitled "Dialogue" was recorded during a weekend gig at Tula's (one of the great jazz clubs of Seattle). The core members of the group- drummer Matt Jorgensen, trumpeter Thomas Marriott, and alto sa ...

Midwest Record (Chris Spector)
Three of the prime movers of the Origin label sound join forces with two pals for a couple of live dates in Seattle at a local jazz fest that finds them dishing up a nu version of west coast cool for traveling through the new millennium Playing to a polite, sold out crowd that is there for the show, the crew delights and holds the audience in the p ...

Jazz Scan (Ric Bang)
The members of Human Spirit ? a core unit of the many jazz musicians who have made Seattle and the Pacific Northwest their home ? are trumpeter/composer/producer Thomas Marriott, saxophonist Mark Taylor and drummer Matt Jorgensen. Their combined resumes includes 14 albums as leaders and dozens more as sidemen. For this release, they added guests Or ...

Urban Flux (Rob Young)
At a glance, this project has eight pliable originals plus the contributors has fourteen albums among them as leaders and sidemen. Human Spirit is the title from a previous album by trumpeter/composer Thomas Marriott, along with his cohorts Mark Taylor and Matt Jorgensen serve up an engaging brew of bop-influenced modern jazz also features two gues ...