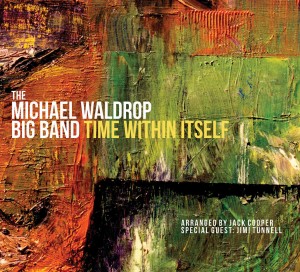 Hearing this crackling big band recording -- so full of swagger and conviction and transcendent playing throughout -- it's hard to believe that it's drummer / composer Michael Waldrop's debut as a big band leader. No newcomer to the game, he paid dues as a working musician in New York and Chicago before pursuing an academic career, earning a masters at the University of Memphis and his doctorate at North Texas, where he played in the famed One O'Clock Lab Band. He also put in ten years with Jack Cooper's Memphis-based Jazz Orchestra of the Delta, developing the relationship that would lead Cooper to lend his prodigious arranging skills to Waldrop's set of originals for this recording.

Reviews of Time Within Itself

Midwest Record (Chris Spector)
A vet of the North Texas Lab Band, you don’t argue with Waldrop’s chops. Leading a modern big band like it was something he was born to do, Waldrop has his eye and ear on the proceedings like a mother hawk watching over her young ‘uns making sure everything stays straight and true for them. Disregarding any elements that made big band corny ...

The Jazz Reader (Dave Gregg)
Time Within Itself, Michael Waldrop’s first big band CD, is a joyous, rip-roaring ride that charts a rollicking course through diverse musical styles, ranging from jazz fusion to the very best of big band jazz. At the helm on drums, Waldrop is the indomitable anchor of the ensemble, a master of kinetic energy who plays both authoritatively and ...

All About Jazz (Jack Bowers)
4 1/2 STARS Drummer Michael Waldrop has named his inaugural album as leader of a big band Time Within Itself. An even more appropriate name might have been It's About Time. Waldrop, who has taught for the past decade or so at Eastern Washington University, boasts a resume as long as one's arm. It includes a master's degree from the University o ...

Percussive Notes (John Lane)
Big band jazz in full swing - Mike Waldrop's debut as a big band leader is a soaring good listen. Waldrop has recently distinguished himself as an educator at Eastern Washington University, but he spent plenty of time paying his dues as a working musician/drummer in New York and Chicago before embarking on his academic career. While at the Univers ...

Jazz Scan (Ric Bang)
Percussionist Michael Waldrop plays both drums and mallet instruments (vibes and marimba). He has a PhD and currently is a professor of percussion at Eastern Washington University, where he teaches both jazz and classical courses. He also directs a big band, and this is that ensemble's inaugural album. Once upon a time - back in unenlightene ...

Jazz Weekly (George W. Harris)
Drummer Michael Waldrop leads a hefty 17 piece band along with a handful of guests on this rich collection of originals. The moods mix from a fusion " Tunnell Vision which features Jim Tunnell's electric guitar to full and glowing harmonies which feature Walddrop on vibes for "Inner Truth." A clever military march includes Sandra Dudley's vocals an ...

International Association of Jazz Record Collectors (Bob Reny)
Dr. Michael Waldrop works by day as a is a Professor of Percussion at Eastern Washington University, but after hours and on weekends he leads this exciting big band, propelling it with contributions on drums and vibraphone. Apart from his career in academe, Waldrop has logged over 23 years playing drums in both jazz and classical settings, experie ...

Jazz Journal (Nigel Jarrett)
British guitarist Allan Holdsworth may be surprised to learn that the description "Holdsworthian" is now current in American jazz journalism. It's invoked on this album to set a context for his Texan counterpart Jimi Tunnell, who swirls through some of Jack Cooper's arrangements on Waldrop's debut as a big-band leader. Liner-note writer Bill M ...

MULTIKULTI PROJECT (Poland) (Andrzej Fikus)
4 1/2 STARS American drummer and vibraphonist (Michael Waldrop) debuts in the role of bandleader. And, what a debut! Musically having to his credit a doctorate at the University of North Texas, where he was a member of the famed One O'Clock Lab Band. Another 10 years spent at a sideman for Jack Cooper in his Jazz Orchestra of the Delta in Memphis ...

Improvijazzation Nation (Rotcod Zzaj)
Something you don't always hear in "big band" recordings these days is right here on this superb eight-song album… "swagger" & "proof of life"! Michael's drums "lead" this elegant excursion into the funkiest of big bands you've ever heard, especially on songs like the straight-ahead jazz on the 7:34 "Munich Musings"… this tune is definitely in ...

All About Jazz (C. Michael Bailey)
This big band recording is notable for its arranger, Dr. Jack Cooper. Cooper recently released a revelatory Jack Cooper: Mists -Charles Ives For Jazz Orchestra (Planet Arts, 2014), which was the "most recommended" recording at All About Jazz in 2014. Cooper is a professor of music at the University of Memphis and he properly embraces the heritage ...