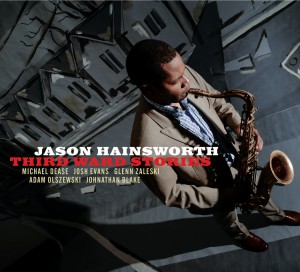 ...an audacious and colorful musical statement that clearly augers well for this promising artist.
ALL ABOUT JAZZ

Third Ward Stories is a bit of a musical biography for this Houston-bred, thoroughly grounded member of the rich Texas Tenor tradition, his paean to the neighborhood he grew up in and the musical memories embedded in the soil of that 'hood. With stops in New Orleans and New York, and later in Tallahassee and Florida State University where he earned his Masters degree, Hainsworth gathers here some longtime friends from that journey for his second recording as a leader. Along with co-producer, NY trombonist Michael Dease, pianist Glenn Zaleski, drummer Johnathan Blake, Josh Evans on trumpet and Adam Olszewski on bass, Hainsworth explores Wayne Shorter's "Prince of Darkness" and Hoagy Carmichael's classic ballad, "The Nearness of You," along with six original compositions.

Midwest Record (Chris Spector)
The fifth ward is for gangsta rap, the third ward is for hard blowing sax men. In the tradition of Houston's hard blowing boppers, Hainsworth takes his ax around the horn and lets influences from the various locales he stopped at along the way add special sauce to the mix. A smart writer as well, he lets all comers know he's a leader to be dealt ...