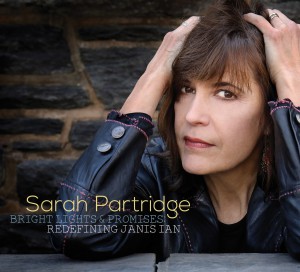 Partridge consistently stretches both herself and the music (and) it would not be surprising if a few of her songs became standards...
L.A. Jazz Scene

Vocalist Sarah Partridge reimagines a collection of songs by the famed folk artist, Janis Ian, whose hits "At Seventeen" and "Society's Child" have resonated with listeners for many decades. Long respecting Ian's musically and lyrically rich body of work, Partridge saw evidence of jazz roots in much of her writing and, along with arranger Allen Farnham, created inspired paths to presenting the songs in a jazz environment. The album contains thirteen selections both old and new, popular and unheard, dating from the late 1960's to the present, including two new originals co-written by Partridge and Ian - "Somebody's Child," and "A Quarter Past Heartache," which features them both on vocals.

All music and lyrics by Janis Ian, except: "A Quarter Past Heartache" &
"Somebody's Child," written by Janis Ian & Sarah Partridge
Arranged by Allen Farnham, except (1,6) arranged by Tim Horner

Elmore Magazine (Annie Dinerman)
Jazz vocalist Sarah Partridge was only tinkering with the idea of recording one or two songs written by singer-songwriter Janis Ian, best known for her hits, "At Seventeen" and "Society's Child." Recently, from the stage where the teenage Ian herself sang in the 1960s, Partridge celebrated the release of her full CD of Janis Ian songs. Bright Light ...

All About Jazz (Dan Bilawsky)
5-STARS How did nobody think to go here before? With a glut of fine Joni Mitchell tributes on the market and a couple of engrossing Laura Nyro nods out there, how is it that no creative spirits in the jazz or cabaret camps thought to make the full-on jump to Janis Ian before now? Hearing Sarah Partridge dig into Ian's body of work makes this conc ...

Midwest Record (Chris Spector)
If Partridge wasn't the art chick with loads extra, we'd have to be scratching our heads wondering why a jazz tribute to Janis Ian. Well, Partridge brings in Allen Farnham to help with the music and brings in Ian herself to co-write some new ones. Take that homage makers! Long after you've taken Ian for granted, this revival does more than pump ...

Music Republic Magazine (Simon Redley)
4-STARS Janis Ian. Folk legend. Singer. Songwriter. A star for five decades. A songwriter's songwriter. It takes a brave soul to set out to "redefine" her songs at all, but in another genre and style altogether requires a giant leap of faith. US jazz artist Sarah Partridge is that person who dreamed up this project; to reinterpret some of Janis ...

CodecPrime (Barry Bassis)
Jazz singer Sarah Partridge came up with inspired idea to record an album of songs by Janis Ian. Many jazz artists have performed Joni Mitchell songs but Ian (who burst on the scene at age 14 with "Society's Child" in 1966) has been overlooked by the jazz world. The Partridge and Ian are so compatible that they even co-composed two of the songs on ...

Cadence (Robert Rusch)
SARAH PARTRIDGE's BRIGHT LIGHTS & PROMISES [Origin Records 82732] is subtitled Redefining Janis Ian. Ian made her mark early in her career as a teenager in the mid 1960s. By the mid-1970s she was on the map with her anthem "At Seventeen", a cutting commentary on the standards of beauty and adolescent cruelty (and this was pre-social media!). Record ...

Jazziz (Neil Tesser)
When Janis Ian arrived in the 1960s as a teenaged singer-songwriter armed with an acoustic guitar, no one would have confused her with a jazz singer. She did have a precociously mature social consciousness--her first hit, "Society's Child," dealt with the establishment's disdain for interracial romance--and her biggest single, the chart-topping "At ...

JazzTimes (Christopher Loudon)
The songbooks of Dylan, Lennon and McCartney, Paul Simon, Tom Waits, Joni Mitchell and Laura Nyro have all been well-mined by jazz artists. But Sarah Partridge is the first to excavate the equally rich Janis Ian oeuvre. Partridge met Ian in an online group of Grammy voters and ignited the idea. Thrilled with the prospect of a gifted jazz vocalist r ...

Broadway Music World (Music News Desk)
On the night of May 11th, at the legendary "Bitter End" rock club in New York City, jazz vocalist Sarah Partridge debuted songs from her new album, "Bright Lights & Promises: Redefining Janis Ian" to rave reviews. A month of her performance, and the album is still receiving acclaim for listeners and and fellow artists across the country. Partrid ... 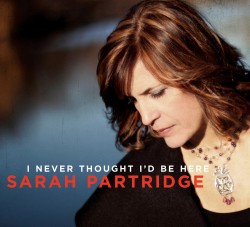 Sarah Partridge
I Never Thought I'd Be Here
Origin 82689