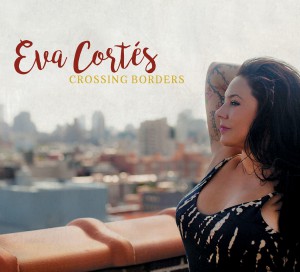 ...a singer in whose artistic melting pot the flavor of flamenco, Caribbean passion and the spices of jazz all mix...
El Mundo, Spain.

Born in Honduras and raised in Sevilla, NYC-based singer/songwriter Eva Cortés delivers a revelatory set of flamenco and blues-tinged Latin jazz on her seventh release, "Crossing Borders." Working for the first time with producer, arranger, and trombonist Doug Beavers, Cortés brought together top-shelf New York musicians for the date, including Luques Curtis, Robby Ameen, Jon Cowherd, Pepe Rivero, Luisito Quintero, Roman Filiú, and a special appearance by bassist Christian McBride. Weaving together captivating original compositions and popular Latin American mainstays, Eva Cortés also adds a social footnote by dedicating the pulsating title track to the 500 lost lives of African refugees in an incident off the southern coast of Italy in 2013. "The new queen of Latin jazz has personality and everything it takes to deserve the title." - EL PAÍS, Spain.

Midwest Record (Chris Spector)
A crowd funded Latin jazz vocalist funded by a crowd that knows their apples, if this feels like a Brazilian record that you just can't put your finger on, it's because she's from Honduras and the crew is playing with pan Caribbean chops. It might not be Brazilian, but it has all the sound and feel of the Brazilian jazz vocal set you've been jones ...

Latin Jazz Network (Raul da Gama)
Editor's Pick · Featured Album Although the release of Crossing Borders by Eva Cortés comes just two years after In Bloom appeared on Truth Revolution Records, it feels like a much longer time since her sultry voice has been heard on record. Thankfully the wait is over and listeners can bask in the beguiling music of Eva Cortés once again. The ...

Jazz Weekly (George W. Harris)
Eva Cortes mixes languages and moods with her flexible team of Pepe Rivero/p, Luques Curtis/b, Robby Ameen/dr, Luisito Quintero/perc, MarvinSewell/g and a snappy horn section along with simpatico guests. Her voice is husky and breathy sensuous on the intimate "Corazon" and spacious during her aria intro to the salsa'd "Sabor a Mi." The horns add f ...