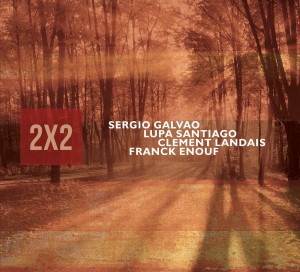 ...a blend of jazz with Latin influences and the performance flows very nicely...the songs insinuate their flow into listeners' consciousness.
WTJU - Richmond

Two widely respected Brazilian musicians, originally meeting and performing together on a 2014 tour, saxophonist Sergio Galvao & guitarist Lupa Santiago developed a quick and exciting rapport, vowing to work more together. Soon after a second tour, Galvao relocated to France where he formed a trio with two dynamic French musicians, bassist Clement Landais and drummer Franck Enouf, making plans to record as a trio in the spring of 2017. By coincidence, Lupa was touring Europe during the same period and the idea to join the trio's recording was born. Meeting in the studio in Normandy on the first day of recording, they brought their compositions and after many jokes concerning soccer, the name for the recording and band came very easily: 2x2. The music presented is fully jazz, but infused with rich experiences and deep influence from their own cultures and travels.

Midwest Record (Chris Spector)
When is euro jazz not Euro jazz? When two Brazilians meet up with two Frenchies in an odd ball circumstance that affords them with a chance to let it all hang out across the borders. A smokingly solid little date that has the angular Euro stuff and the breezy Brazilian stuff, frequently facing often in the same staff, it's a mash up these pros kno ...

DiscUnion (Japan) (Editor)
The saxophonist SERGIO GALVAO and the guitarist LUPA SANTIAGO met on a tour in 2014 and spirited up. Sergio Galvaon, who later moved to France, formed a trio with two French musicians, bass player CLEMENT LANDAIS, drummer FRACK ENOUF. While planning to record as a trio in the spring of 2017 I was planning to record together as Lupa Santiago will to ...