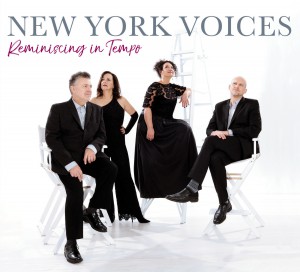 New York Voices lives up to its reputation as the most exciting vocal ensemble in jazz...
Boston Herald

After a decade of collaborative, and superlative, releases with large ensembles such as the WDR and Bob Mintzer Big Bands, the New York Voices return to their roots marking their 30th Anniversary with one of the most ambitious, accomplished undertakings in their esteemed catalog. Peter Eldridge, Lauren Kinhan, Darmon Meader & Kim Nazarian worked with revered producer Elliot Scheiner, applying their stamp to standards by Cole Porter & Al Jolson, modern jazz gems from Chick Corea & Fred Hersch, a deeply personal swing-era classic from Duke Ellington, songs by the Beatles & Ivan Lins, and a pair from Cuban classical composer, Ignacio Cervantes. Opening is a tour-de-force rendition of Al Jarreau's lyrical contribution to Brubeck's "Blue Rondo à la Turk," which includes a new vocalese section based off Dave Brubeck's and Paul Desmond's original solos, with lyrics by Lauren Kinhan. Reminiscing in Tempo finds the quartet's individual chops and their collective chemistry to be as powerful as ever, foretelling yet another creative and significant span for this landmark group.

Reviews of Reminiscing in Tempo

All About Jazz (Dan Bilawsky)
4-STARS Time flies, so why shouldn't New York Voices revel in that passage on life's jet stream? Reminiscing In Tempo marks the celebrated vocal quartet's 30th anniversary in style, presenting a dozen performances delivered with imaginative flair. The arrangements and vocals, not surprisingly, are airtight, and the joy in the music is palpable. ...

Amazon (Dr. Debra Jan Bibel)
Jazz vocal ensembles have a long history [recall the Mills Brothers of the 1930's, the Hi-Lo's quartet of the 1950s, Lamberts, Hendricks & Ross of the 1960s, and the Swingle Singers of the 1970s) and several are still active. While Manhattan Transfer continues in its second edition, the New York Voices, founded 30 years ago, continues largely intac ...

All About jazz (C. Michael Bailey)
What the quartet New York Voices achieves with their performance of Dave Brubeck's "Blue Rondo Á La Turk" disguised as "Round, Round, Round" by lyricist Lauren Kinhan is nothing short of a schizophrenic jazz "Carmina Burana." Lithe, muscular, and smart, the performance is dense and thought-provoking, deftly navigating between its disparate 9/8 and ...

Jazziz (Editor)
With the release of their 11th album, Reminiscing in Tempo, New York Voices celbrate their 30th year as one of jazz's premier vocal groups. A survey of some of their favorite composers, the album contains interpretations of songs by Dave Brubeck, Duke Ellington, Chick Corea, Ivan Lins and Fred Hersch, as well as a couple of original tunes. The Voic ...

Jazz History Online (Thomas Cunniffe)
Still swinging in their fourth decade together, the New York Voices continue to define the highest standard for vocal jazz groups. Their recordings are appearing at fairly regular intervals these days, and their latest disc, "Reminiscing in Tempo" includes a fine selection of jazz standards and originals. The album opens with a dynamic arrangement ...

Jazz Weekly (George W Harris)
Taking the mantle of The Manhattan Transfer to the next level, the team of Peter Peter Eldridge, Lauren Kinhan, Darmon Meader and Kim Nazarian mix rich harmonies, vocalese and strong soloing in a wide range of jazz colors and palates. The vocal textures are oil color rich, as they display on the gorgeous a cappela p ieces "Los Tres Golpes" while gi ...

Rifftides (Doug Ramsey)
In their third decade together, the group's Reminiscing In Tempo fortifies their reputation as a vocal ensemble whose musicality matches their ability to reach deeply into the rhythmic heritage that gives jazz its unique place in world culture. I would be surprised if the lead track doesn't grab the most attention, in part because when "Round, Roun ...

The Jazz Page (Editor)
New York Voices prove why they have become a vocal jazz institution with Reminiscing in Tempo. The production is a wonderful, eclectic mix of songs by Dave Brubeck, Chick Corea, Ignacio Cervantes, Cole Porter, Duke Ellington, and John Lennon and Paul McCartney. The harmonies of the group's Peter Eldridge, Lauren Kinhan, Darmon Meader and Kim Nazari ...

DownBeat (Allen Morrison)
The title track of New York Voices' new album, Reminiscing In Tempo (Origin), was one of Duke Ellington's first long-form compositions in the 1930s. (Mel Tormé added the poignant lyrics in 1962.) It's an apt tune for a group now celebrating its 30th anniversary. Founded at Ithaca College, New York Voices remains one of the world's foremost voca ...