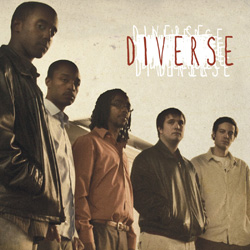 Diverse, the eponymous album by Kansas City Jazz group Diverse, is a true success story, the rarest kind of success story, the kind that almost never develops to such a fruitful outcome. Most of the elements of it are fairly commonplace?all of the right pieces come together, a group of talented musicians meet at college, they begin working on their own original music, they enter a contest, grand prize is a recording contract?these things happen. But what doesn't usually happen is full delivery on the part of the band and of the contest sponsors to create a top notch album worthy of national air play. This is that one in a million story where it all came together.

The group formed in 2008, and within six months, leapt into competition in Boise, Idaho at the Gene Harris Jazz Competition, sponsored by Boise State University. First prize was a recording contract with Origin Records and, hopefully, world wide fame. The 2009 release of Diverse is the ticket to earn the quintet just that.

Diverse features five top notch, young musicians from the UMKC Conservatory of Music. Trumpet player Hermon Mehari has laid down a recording that displays the precision of a classically trained musician, with almost none of the squawks that most trumpet players let slide, even in heavily produces recordings, as acceptable quirks of in-the-moment soloing. Mehari's playing is precise. He is also the composer of one of the best songs on the album, "Lost in Darkness" (track eleven).

Tenor saxophonist William Sanders provides the best composition on the Album, the final track, entitled "Boise." Here too he displays his most inspiring and eccentric playing. "Boise" is the kind of song that could be spun into the inspiration for a new genre of music or a new style of playing saxophone. He produces an ambient moaning tone, sliding between pitches, which marks this song with true originality of both style and melody.

John Brewer is the newest member of the quintet and does an admirable job of filling the album with traditional jazz structures, adding fluidity to the rhythm section's grooves with his sturdy presence on the keys. Although Brewer did not compete with Diverse in the competition that yielded the album deal, he has been a great addition for sonic depth.

Ben Liefer may be the most outstanding instrumentalist in the group, quite a feat to accomplish in this talented mix, especially from the bass position. Liefer seems to have a very natural ability to establish a groove, get in the pocket, yet keep the bass end inventive. Many bassists can display either solid rhythmic support or innovative chops, but only a very few can produce both with outstanding quality. Liefer's bass lines are the lifeblood of most of the songs on the Diverse album, and his nuanced interplay with drummer Ryan Lee is worthy of a listen all by itself, even without the electrifying winds and keys. Liefer is equally adept on the upright bass and the electric, making the best of each instrument by expertly plying the upright for its woody tones and the electric to produce heart grabbing grooves.

Drummer Ryan Lee is also an inspired musician, and a perfect complement for bassist Liefer. His is a sturdily practiced chop that admits a wide range of influences, all flawlessly and seamlessly intermingled. Though his work on the album is solidly "jazz" drumming, Lee seems to musically wander a landscape of styles, stopping here to pick up a reggae rim-shot, there to grab a rock and roll snare and drum combination, and over to a sweet spot to weave a classical music backdrop at a calm moment.

Diverse is expertly produced and even features a track of Kansas City saxophone great Bobby Watson (track seven, "Where it Lives"), a mentor who provides insightful liner notes about the quintet's formation and growing experience. For those who love modern and avant-garde jazz, this album is truly a winner.

Other Reviews of
"Diverse":