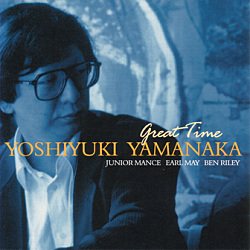 Tenor sax player Yoshiyuki Yamanaka was leaving nothing to chance for his first album for Origin. He brought three of the top rhythm players extant into the studio, the inestimable jazz artists Junior Mance, Ben Riley, and Earl May. As much as the fine playing by the tenor sax man, these three contribute to the musical achievements attained on this CD. Over his career, Yamanaka has sampled the styles of the great tenors, including John Coltrane, Stan Getz, and Charlie Rouse, before reaching his own stylistic preference, which combines the light, dry sound and the strong sense of musical form of Lester Young, the melodious improvisation of Stan Getz, the laid-back manner of Paul Desmond, and his own lyrical beliefs. This healthful marriage is heard to good advantage on such tunes as Thelonious Monk's "Let's Cool One." This track also highlights the support given by Mance's piano, May's lightly plucked bass, and the gentle but influential drumming of Riley. Yamanaka shows a pleasurable ballad style on a rarely recorded "Whatever Possessed Me." Typically, rarely played tunes are in that category because they aren't very good. But this Tadd Dameron tune is a gem, given a glowing burnish by Yamanaka and Mance. The tenor sax player pulls out his swinging credentials on "Great Time" and "All the Things You Are." And like many tenor men before him and to come, he gets his membership card punched with the tenor sax psalm, "Body and Soul." Everyone is loose and having a good time on this session. You can get a feel for this relaxed attitude by the back and forth patter of the participants at the end of some cuts. Great Time displays the easygoing making of mellifluous jazz music, and is recommended.

Other Reviews of
"Great Time":