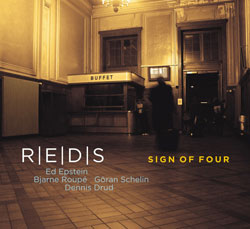 The acronym moniker stands for the four musicians in this quartet ? guitarist Bjarne Roupe, baritone saxophonist Ed Epstein, drummer Dennis Drud, and bassist Goran Schelin. This is northern European jazz, in that three of the players are based in Denmark and one in Sweden (though Epstein, father of saxophonist Pete Epstein, is an Oregon native). It also has that calculated feel that typifies jazz from the Scandinavian countries. But it is more approachable than much of the compositional jazz of that region in that it brings in a more American sensibility. The title track is a modern swinger that has numerous bluesy elements, especially as done by guitarist Roupe. Those blues elements make this more interesting, as does the cool tone of Epstein's baritone sax. There is an intimacy to this music, but it also has some fun. The original tunes bop, ("Space Acre") and groove ("Cambodia"). It's not groundbreaking stuff, but the combination of the rich tones of both the guitar and the sax, combined with the vibrant sounds of the bass and drums, makes this a bit of Americana in Denmark.