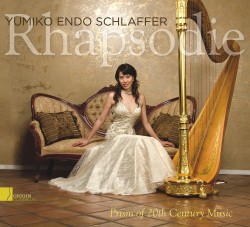 Like the luscious glamour of her CD cover, Japanese harpist Yumiko Endo Schlaffer plays with a luxurious richness as soft as the velvet she lightly places herself on. Rhapsodie is sheer grace and elegance.

I am convinced a great deal of planning went into this CD. It?s not just one beautiful number after another with several French pieces that leaves us breathless and relaxed?Yumiko takes us far afield. One of my favorites is from her native Japan?the evocative, cinematic koto-like piece of Toshiro Mayuzumi, Rokudan. Yumiko took me back in time, to the mystery of a closed and ancient Japan, her timing as tantalizing and alluring as the best storytellers.

This piece was followed by a work by Bernard Andrés, whom I am coming to know well after reviewing Scorpion Tales. Yumiko?s placing of Tanka?a word that can refer both to Japanese poetry and Tibetan silk painting?is the most natural extension of what we?ve heard. Sparse, fervent, and profound, we feel the heart of artists who spent as much time in the white space of meditation as that of actually making their work, which often came out quickly and explosively once the theme was decided upon. Yumiko has exactly the right touch for this music.

Pulling us back to earth is one of Philip Glass?s Metamorphoses. While his music is seemingly explained by its repetition?the mesmerizing quality enough all on its own?the storytelling Yumiko used in the preceding pieces allows Glass?s simplicity to take on gravitas and direction. For me, these three pieces together make this disc a must-have for the trio?s sheer interest, but also for the way they are presented by Yumiko with absolute self-assuredness and a vitality that gets right inside the music.

This is not to say the other pieces fall short. The smile that came over my face when we return to Pierné?s Impromptu-Caprice?the exhale of joy in that first arpeggio?was sheer happiness. As I listened again to Caplet?s Divertissements, Grandjany?s Rhapsodie, and Tournier?s Vers la Source dans le Bois all excellently played, what struck me was how Yumiko?s seductive phrasing blossomed before my ears. She is able to take her solo instrument and create the soundscape of a symphony orchestra with many characters like a Scheherazade telling tales all night long. This disc is a revelation?an experience worth having in your own collection. ****1/2 Stars

Other Reviews of
"Rhapsodie":