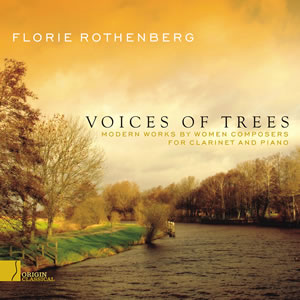 Little-heard are modern compositions most of the time, with most classical musicians as well as fans opting more often for the classics, as it were. Seattle-based clarinetist Florie Rothenberg wanted to push the envelope a bit in response to this, finding compositions from modern female composers specifically for the clarinet and piano. The recording opens with the title composition, a fairly pastoral series written just for the album by Rothenberg's accompanist Rachel Matthews. From the pastoral format of the opening series, the album moves to a somewhat more modern, disjointed sound with Joan Tower's Fantasy. Libby Larsen's Dancing Solo suite would nearly fit into the aesthetic of Gershwin's American in Paris, and South African composer Priaulx Rainier's Suite for Clarinet and Pianoforte seems to decompose the two instruments into their primordial elements, thrashing against one another for periods and working together for periods, always showcasing their singular aspects. Rothenberg does each piece justice, using the clarinet in a starring role rarely heard in the bulk of classical music (and really, in any popular music). Rachel Matthews accompanies ably, keeping herself in the background throughout the majority of the album and coming forward only when the composition demands it of her. Modern female compositions for the clarinet are certainly something of a niche sub-genre, but this duo works well within the restriction.

Other Reviews of
"Voices Of Trees":