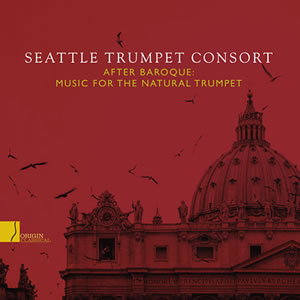 A group created in order to study and exhibit the sound of the natural trumpet (the trumpet prior to the addition of valves), the Seattle Trumpet Consort put together a collection of works created after the Baroque period that showcases the trumpet in its original form, using instruments modeled after museum pieces. Combining with them is a timpani modeled after another museum piece and a pair of flutists using Baroque versions of their instrument. As one might expect from the instrument, with its sonic (and general) similarity to a bugle, there is much fanfare to be had here. The album opens with a pair of parade pieces by Leopold Mozart (Wolfgang's father) and Carl Philip Emmanuel Bach. A pair of divertimenti utilize the Baroque flutes as accompaniment to somewhat lighten the mood. However, more fanfare quickly returns, with pieces from Dvorák and Wagner (as well as Neukomm) anchoring a series of slightly newer fanfares, though there's a bit more melody involved in these pieces. Finishing out the album are a pair of more modern works, a Britten piece and a modern piece by Marti Epstein commissioned by the Consort. Throughout the album, the collective does a fine job to present the horn in its original element, making what should be straightforward and dull fanfare material into much more. In particular, the modern compositions display a range not expected, but entirely worthwhile.

Other Reviews of
"After Baroque: Music For The Natural Trumpet":