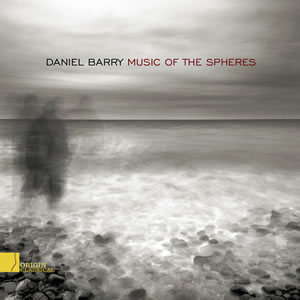 Multi-instrumentalist Daniel Barry takes the opposite tack of Tsatsanis and Lenti by composing for the future and his approach is novel. Barry recorded Music of the Spheres in a two-million gallon cistern found on the grounds of the Fort Warden State Park in Port Townsend, Washington. The empty cistern has a natural 45-minute reverberation time that surrounds and extends all sounds made not unlike depressing a piano's sustain pedal to the nth degree. Barry used this unusual environment to investigate the tonal palette of the five instrumental families (brass, winds, string, percussion, and electronics). Added to these is voice rounding out an approach to composition and performance recalling Luciano Berio's Sequenzas.

For this unusual recital, Barry composed 13 relatively short pieces featuring one of the instrumental families. "Zen 5" features Barry's coronet. James Dejoie's clarinet is showcased on "3 Orbs." The cistern sonics have a way of extending sound and mimicking monophony as in Plainchant, characteristics amplified by the recording confines. Regarding the Berio comparison, Barry's compositions are as narrowly defined as Berio's, but lacking the latter's complexity. Barry's compositions sound like Berio on morphine, underwater. And this is not a bad thing. These pieces make for great ambient music that would have a home on Hearts of Space. I am not sure I would classify this music as "classical." It is music that is pure, rendered in a certain place at a certain time.

Other Reviews of
"Music Of The Spheres":