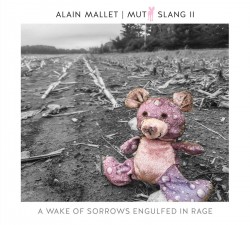 The art of jazz would seem to be a mystery to most, and at the same time, a language understood by many. In the entirety of its history, it has served as a central location for idiomatic change, a virtual jumping off point for explorative ventures into both new and traditional world forms. The wide lens of the music of pianist/composer Alain Mallet mirrors in a way, the large embrace of all humankind necessary globally to build a meaningful dialog on the path to peace and understanding.

Mallet releases this music while the global Covid-19 pandemic, and the Black Lives Matter movement, stand front and center in the collective consciousness of the US, as well as all humankind. As an artist and human, he could not bring himself to promote his work in the midst of so much tragedy. He decided to use it as a means to support BLM, to enable a conversation and resulting action so desperately needed in this fight for justice.

"My new record dropped last month and in the midst of this multi-faceted human tragedy we're in, I could not bring myself to promote it. Instead, I searched for the most dignified way to turn commerce into meaningful action, and this is what I came to in the end," states Mallet. He decided to donate his part of the proceeds from the album to Black Lives Matter, and bi-annually match sales up to $1000.

The term "world music" doesn't seem to quite apply to Mallet's musical conception represented by his Mutt Slang project which first came to light on his 2018 release, Mutt Slang (Etrain). For the second edition, A Wake of Sorrows Engulfed In Rage (Origin, 2020), Mallet re-immerses in the same turbulent musical waters, to create a narrative that expresses compositionally, a broad spectrum of emotion, enhanced by the wonderfully unpredictable mandate of improvisation. "My earliest intentions were to use lyrics in support of the most personal topics, and pen the instrumental as sort of an impressionist narrative," says Mallet. The wide swath of musical innovation that arose from gathering musicians from many divergent paths would impact his vision for this recording.

Mallet's resume is diverse and fascinating. His impact as a mentor while teaching at the Berkeley School of Music in Boston has long been acknowledged. As a sideman, his resume is as diverse as the music presented by Mutt Slang, performing with Paul Simon, Phil Woods, Madeleine Peyroux and Pacquito D'Rivera. It is not so far a reach then, to imagine what sounds he may choose to work with as a composer. What may appear as randomly diverse, begins to take on the character of the composer himself.

The opener, "Trolls," speaks broadly as to what is to come on the instrumental tunes Mallett offers. The vibe is a as a joyous Latin chant, pinned rhythmically by percussionist Jamey Haddad, drummer Diego Joaquin Ramirez and bassist Peter Slavov "Goya" follows, finding a comfort zone for collective improvisation within a multi-cultural rhythmic setting. Mallett offers a winding solo on rhodes, with Samuel Batista following with a sweet, then caustic offering on alto saxophone. "Requiem" offers a stark guitar/piano foundation for the Spanish vocals of bassist Alex Alvear. The tune is very reminiscent of the ballads of Chilean songwriter/poet/activist, Victor Jara.

Clarinetist Anat Cohen joins for three tunes, and supplies some of the true improvised gems of this collection of tunes. On the meandering, funky "Prepare to Stop," her presence is felt with a solo that bridges the tune from one destination to the next. She joins Mallet in duet, for the introspective "3 Funerals #2: Roberto." The composition is the record's most memorable melody. Cohen's playful interplay with Mallet is a joyous counterpoint. While this track is unlikely to receive the radio play of some of the album's more high-energy pieces, it is unique within a beautiful sense of repose and melody. It seems to land nearest to where the composer feels at peace.

Still, the album as a whole plays like a world traveler immersed in different cultures, though limited at times by barriers of language and culture. Idiomatic phrases are learned, and weaved into the fabric of the music, at times lacking collective cohesion. It is in itself a very difficult premise to navigate. What delivers this recording is the fine level of musicianship, and an all-in attitude that refuses to be denied. The music can move from forlorn to celebratory in a moments notice, in a way shadowing the feeling of detachment from one's own life that many feel in these times.

This collection of ideas and musicians known as Mutt Slang is exactly that—a hybrid musical creature speaking a street wise vernacular. "Mutt Slang is very much the result of this convergence of all the musics I love, of digging to get to their shared soul and rebuild something fresh, in order to discover where I belong and give others a chance to do the same," says Mallet. It is by way of the artist's social awareness and generosity, a work assured to have impact.

Other Reviews of
"Mutt Slang II: A Wake of Sorrows Engulfed in Rage":