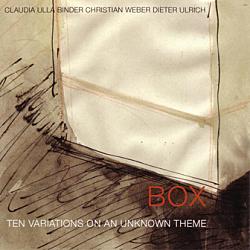 A trio of Swiss jazzers here combine for a series of entirely improvisatory jazz built in theory around a theme. That said, the theme is also unknown. The goal is to make improvisatory music while creating a theme by way of its variations. By circling in from the outside, the core form will eventually become clear. The players all perform well on their respective instruments, in a basic piano trio (with an occasional outburst of bugle). The music does tend toward the sparse end of the spectrum, as they search out riffs that mesh with one another. The music generally builds from what almost sounds like pre-show tuning into a sudden coalescence of a riff, a motive, a few bars, then devolves back into the tuning stage. Christian Weber's bass seems to be the driving force many a time, as a sudden walking bassline evokes action from the others. The music is interesting, almost academic, but not exactly what one might groove to. That isn't the point though. This is exploration of how music is made on the spot, not with preconceived motives and snippets of well-learned solos, but from the ground up.

Other Reviews of
"Ten Variations On An Unknown Theme":