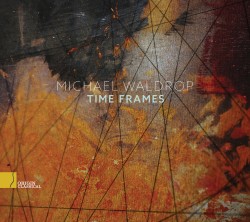 4-STARS While percussionist Michael Waldrop's previous work under the umbrella of the Origin imprint was firmly set in the jazz camp, with a pair of big band bonanzas and a magnetic trio date to his name and credit, this set typically moves beyond those borders, often offering an intriguing world music slant on contemporary classical percussion. Highlighting Waldrop's marimba (and vibraphone and drum set) work in a wide variety of settings, and showcasing his highly developed approach to composition and interpretation, Time Frames provides a passport to discovery as it traverses the globe.

The opening coupling of Waldrop's "Fractals" and "Dem Dakar" dances to the pulse of the African heartbeat, as sequenced bass lines, atmospherics and additional percussion support the leader's rhythmically engaging marimba. Then things move due north for Jack Cooper's Three Mediterranean Views. A jazz-inflected sonata for marimba and vibraphone, this work makes pit stops in Greece ("León de Palamidi"), Italy ("Notte a Venezia") and the South of France ("Château d'If") while spotlighting a strong musical connection between Waldrop and pianist Steve Snyder.

Moving away from the marimba, Waldrop takes a ride on storm currents with his own Katrina's Path. A suite for two drum sets, it finds the leader teaming up with Marko Djordjevic for a well-charted trip from "Brazil" to "Cuba" to "New Orleans." And with groove language to match each locale tag, those pithy pieces prove to be as colorful as the geography they reference and every bit as powerful as the overriding subject.

Waldrop returns to African influences in several places across the program, delivering trance-inducing treats on "Delineations," flexing his six-mallet technique through "Sixth Chakra" and weaving a hypnotic spell on "Continuity." But he's not fixed to that landscape (or any other). Always keeping variety in mind, he takes several steps away from the map to introduce performances primed for recital halls. There's Nathan Daughtrey's wonderfully chimerical "Almost Beyond," pairing Waldrop's marimba with Ivana Cojbasic piano; Gordon Stout's "Incoming," where the leader uses a drum kit to color, rumble and snake his way through mazes (while the composer makes a serious impression on mallets); Jonathan Middleton's "Hollow," a solo marimba composition drawing on the DNA of Honduran rosewood (which, not coincidentally, is the wood used to make the instrument's bars); and Brad Dutz's "Tortoise Efficiency," where Waldrop and Dutz bookend an improv-friendly core with fixed findings. Easy to appreciate, hard to categorize and impossible to ignore, Time Frames is a testament to one exceptional percussionist's determination, skill and creative vision.