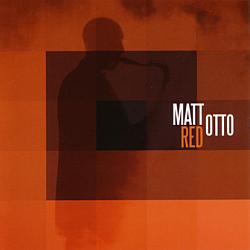 Tenor saxophonist Matt Otto's latest release, Red, is an intriguing collection of 8 original compositions. Otto, now based in Los Angeles, is joined here by a trio of friends from his years on the New York scene. On this disc, Otto and his band have crafted a sound that is immediately enjoyable, and increasingly impressive with each subsequent listening. Mid-tempo grooves and pensive ballads, all of the songs share a certain haunting, understated sophistication, which characterizes this CD.

Red opens with two mellow mid-tempo numbers, "Class Struggle" and "Work Day", each highlighted by the soloing of Otto and guitarist Greg Touhey. Otto's playing is tight and under control at all times ń a boxer, not a puncher. And like a skilled boxer, he stays within himself, confidently bobbing and weaving melody through the steady rhythm, jabbing and dancing, soloing in flurries of notes. Otto has a more than capable sparring partner in Touhey, who shines throughout, and a tight rhythm section (Qasim Naqvi, Danton Boller) in his corner, pushing him forward. Otto and company then settle into two ballads, "Fer" and "Brother Jim." On "Fer," one of the CD's best cuts, Otto lays out the soulful, breathy tone that has inspired comparisons to Stanley Turrentine. Following a rather ordinary "Brother Jim," Otto and company turn it up a notch for the final three tracks. On standouts "Forces and Relations," the beautifully melodic "Red" and "Le Mort," Otto soars with Touhey close behind. Otto's playing on these tracks, while still very much under control, is at it's most expressive and unrestrained.

Other Reviews of
"Red":