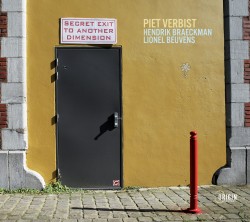 Double bassist Piet Verbist ( Toots Thielemans, Jef Neve, Jasper Blom), drummer Lionel Beuvens and guitarist Hendrik Braeckman have been playing together in different groups for quite some time, but this is only their debut album as a trio.

Every now and then a person needs an escape route, according to Piet Verbist. It sometimes leads to unexpected encounters, which in turn form the motive for a new musical adventure. In short, this is the background story of this 'Secret Exit To Another Dimension'.

With his two companions, Verbist charts an escape route, away from daily rituals to recharge your batteries and see everything from another dimension. It is not a definitive flight but rather a timely release to create other possibilities. Opening track 'The Other Side' illustrates this nicely. The three subtly stimulate the listener's curiosity. Surprised by a light touch of the strings, Beuvens is busy with brushes as he can do so well and Braeckman carefully plays his custom made guitar. In the same reserved way they then delve into (folk) blues with Charlie Haden touch, which can be heard in 'A Noble Trice'. The trio purposefully breaks through this fragile canvas every now and then, as in their adaptation of Parker's 'Cheryl'. The most powerful cross is 'Secret Exit', in which all three go wild with Braeckman as absolute troublemaker, harmonizer at the ready.

Also whimsical and with the necessary contrasts, 'Ji Ha', an ode to Jim Hall, is brimming with complex tempo changes. Closing is the open and Americana-tinged 'Minikin Milan' with repetitive bass line, indebted to Bill Frisell. Before that, the listener is still entitled to a subdued version of Monk's 'Pannonica' - with a half-concealed New Orleans marching band accent - and the slightly soaring 'Bridge House'.

A recording that fits perfectly in the catalog of the American label Origin, which also releases music by Alon Farber, Rodney Whitaker, John Stowell, Hal Galper and Joe Locke. Presented as a digipack and with street art by Antoine Caramalli .

Hopefully this trio doesn't opt ​​for a final breakout as the live potential is obvious. The fact that this is almost all about first takes says it all.