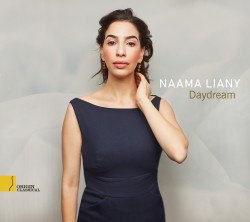 The French-Israeli mezzo-soprano Naama Liany is set to launch her debut album titled Daydream with a release show this January at the Philharmonie. The album was supported by the culture ministry and Kultur lx.

Tell us about your new album. What inspired the idea to create it?

My new album, Daydream, brings together works on the subject of dreams and daydreams by Samuel Barber, Leonard Bernstein, Federico Mompou and Albena Petrovic. The album was developed with the support of the Philharmonie Luxembourg and recorded at their facilities with the help of an award from the Luxembourg Ministry of Culture. The inspiration was from the subject of dreaming; in fact, my parents always recall me waking up at the age of four and recalling a dream where I sang in front of a crowd of joyful listeners.

How many songs are included in the Daydream album?

There are three song cycles in the album by Bernstein (I Hate Music!), Mumpou (Combat Del Somni) and, Barber (Despite And Still); in addition, there are two arias from the new opera The Piano Blue by Luxembourgish living woman composer Alben Petrovic.

The album brings together works of renowned American, Spanish and Bulgarian composers--Samuel Barber, Leonard Bernstein, Federico Mompou and Albena Petrovic. Did you make this selection? If yes, why?

Honestly, I made the selection without any regards to the composers' origins, it was purely musical and conceptual criteria that lead to these decisions.

What vocal routines do you do before each performance/recording?

Singing is just like being an athlete, you always have to be ready and in shape, some concerts come in surprise, and for the majority of them, one needs to build stamina in order to perform well consistently. So yes, I have specific routines in my daily practice, many vocal exercises, drinking many fluids, and my personal thing is actually eating pasta before a concert! Funny enough, as a young swimmer I used to eat that too before competitions.

The album was developed with the support of the Philharmonie Luxembourg and was recorded there. What other professionals were instrumental in the recording?

The album was also successful thanks to the sensitive professional accompaniment of Grammy-nominated sound engineer Patrick Lo Re, he truly has unique skills specifically capturing the whole scope overtone layers of the voice. In addition, I was accompanied by pianist Rosalia Lopez whom I've collaborated with many times and built a great personal and musical relationship.

Moreover, this album was made possible with the support of Luxembourg Ministry of Culture, KulturLX, and, BIL Fondation Indépendance. All of them were highly instrumental in the creation of this project.

How long did it take you to finish the album and which song is your favorite?

The whole recording took place over two very intense days in July, and the release and the first concert will take place in January 2023. It's such a tough task to choose a favorite, I like the fact that each song represents different perspective on the main theme. From hope to assertiveness, following identity to lost love, and from a tragedy to new hope.

What message would you like your fans and listeners to take from the entire Daydream album?

The main message I'd like to convey is of authentic belief that there's nothing we can't accomplish if we put our hearts and dreams towards it. I hope that by listening to these different songs, people will be inspired to follow their dreams and paths.

You have several performances and recitals already booked in 2023--from Israel to Spain, the United States and Luxembourg--which of these are you looking forward to the most and why?

That's an easy one, it is for sure the performance at the Philharmonie in Luxembourg which was organised by the City of Luxembourg and the support of this beautiful institution.

Other Reviews of
"Daydream":